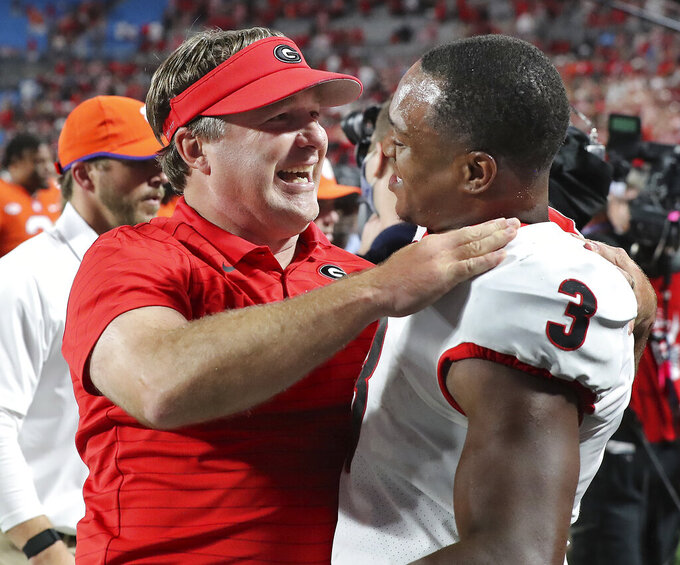 LEXINGTON, Ky. (AP) — Kentucky men’s basketball coach John Calipari said he contracted COVID-19 after being vaccinated, but pointed out he is relieved the shot did its job in leaving him with mild symptoms.

Other notable breakthrough cases have occurred in college football, with vaccinated players and coaches testing positive. That includes second-ranked Georgia and Mississippi; the Bulldogs could be without several players in their next game and Rebels coach Lane Kiffin missed his team’s opener after testing positive.

Calipari revealed Tuesday that he tested positive before July's NBA draft, which kept the Hall of Famer from his annual ritual of attending the festivities to see his highly touted players realize dreams of becoming first-round selections. His announcement follows Monday’s revelation by Georgia football Kirby Smart that “three or four” players on the second-ranked Bulldogs were sidelined with COVID-19.

Kiffin did not travel with the Rebels to Atlanta for Monday night’s 43-24 victory over Louisville after announcing his own breakthrough case on Saturday.

“I am grateful to be vaccinated and experiencing only mild symptoms,” Kiffin said in a statement released on Twitter.

The coach joked during the virtual news conference that he “busted the line” to get vaccinated and added that he didn’t reveal his positive test back then to avoid discouraging the public from being vaccinated. He doesn’t regret skipping the event since it meant avoiding potential coronavirus exposure to players, staffers and others.

In going public now with his mild symptoms, he hopes more people get vaccinated.

“I just encourage people to think about this,” said Calipari, who isolated himself from family members. “It is kids going back to schools that are not vaccinated that can bring it back to you or your family. It could happen. And if you are vaccinated, the chances of something serious happening are very, very, very slim.

“It’s your best chance of protecting yourself, maybe your family, your parents, whatever. ... There were breakthroughs, but they’re not that sick.”

The positive tests for Georgia and Ole Miss come despite both programs having met the Southeastern Conference’s 85% vaccination threshold to avoid further COVID testing and masking requirements. At Ole Miss in particular, Kiffin, his players and staff are fully vaccinated.

The Atlantic Coast Conference has a similar vaccination 85% threshold, in which schools meeting it only have to test once weekly as opposed to three times for programs that fall below it. Other schools, state and local protocols still must be followed.

Guidelines for spectators are less stricter this season after last fall’s protocols that held attendance far below capacity at many football-mad venues. No. 13 Florida rolled past FAU 35-14 on Saturday night before an announced home crowd of 86,840, with only a few attendees spotted wearing masks.

Georgia’s 10-3 win over then-No. 3 Clemson occurred without sports medicine director Ron Courson, who tested positive with a breakthrough case of COVID-19 and didn’t make the trip to Charlotte, North Carolina. Smart said Courson is doing well but noted that several staffers have also been out recently along with players.

Even with a vaccine in place compared to last fall and other safeguards in place, risks and concerns remain.

“That concerns you not only for the players on your team that are unvaccinated, that are playing and not playing because we want everybody to be safe," the coach said.

“But it concerns me for the players that are vaccinated. That we could lose them. It’s at the highest it’s been since fall camp right now. I think there is this relief that everyone feels like everything is back to normal. Just not for us right now.”