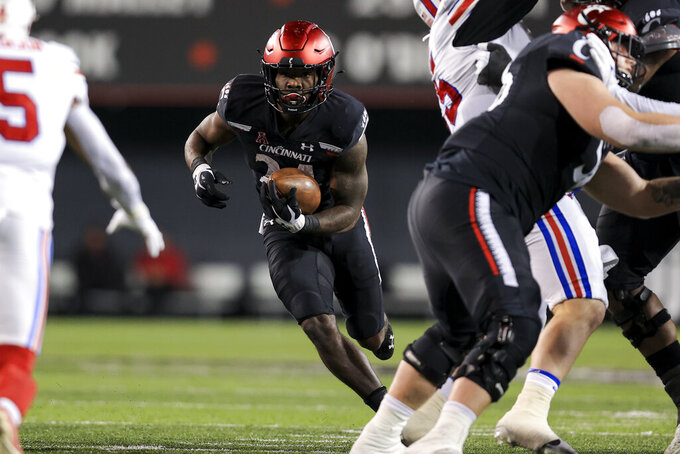 Cincinnati running back Jerome Ford carries the ball during the second half of the team's NCAA college football game against SMU, Saturday, Nov. 20, 2021, in Cincinnati. (AP Photo/Aaron Doster)

—Bryce Young threw for three touchdowns and ran for another as the fourth-ranked Crimson Tide rolled over No. 1 Georgia 41-24 in the Southeastern Conference championship game.

—Jerome Ford, Cincinnati, rushed for 187 yards and two TDs as the No. 3 Bearcats rolled past No. 16 Houston 35-20 in the American Athletic Conference championship game.

—Hassan Haskins, Michigan, ran for two second-half touchdowns and broke a school record with 20 on the season, helping the No. 2 Wolverines capture their first Big Ten title in 17 years and a probable playoff berth with a 42-3 rout over No. 15 Iowa.

—Cole Johnson, James Madison, passed for five TDs, ran for a sixth as the Dukes defeated Southeastern Louisiana 59-20 in the second round of the FCS playoffs.

—Logan Bonner, Utah State, passed for 318 yards and four TDs to help the Aggies win their first Mountain West Conference championship with a 46-13 rout of No. 19 San Diego State.

—Tommy Mellott, Montana State, ran for 183 yards and two TDs in a 26-7 win over UT in the second round of the FCS playoffs.

—Ramon Jefferson, Sam Houston, rushed for 166 yards and two TDs, and the defending national champion Bearkats beat Incarnate Word 49-42 in the first round of the FCS playoffs.

Bryce Young stunningly carved up the nation’s top-rated defense, giving Nick Saban and Alabama a shot at another national championship.

Young threw for three touchdowns and ran for another as the fourth-ranked Crimson Tide rolled over No. 1 Georgia 41-24 in the Southeastern Conference championship game, a result that likely sends both powerhouse programs to the four-team College Football Playoff.

Georgia cruised through the regular season, barely challenged and a unanimous choice as the nation’s No. 1 team for the past two months. The Bulldogs boasted a fearsome defensive unit that had allowed only 6.9 points a game.

Young was the title game MVP and made Georgia’s vaunted defense look like a scout team, surely bolstering his Heisman Trophy chances as well as moving on to an even bigger game on the final day of 2021.

Michigan is headed to the College Football Playoff for the first time.

Hassan Haskins ran for two second-half touchdowns and broke a school record while running back Donavan Edwards threw a 75-yard TD pass to help No. 2 Michigan capture its first Big Ten title in 17 years and a playoff berth with a 42-3 rout over No. 15 Iowa.

Resurgent Michigan has won five straight and if it reaches the playoff, as expected, would need one more win to return to Indianapolis to play for its first national championship since 1997.

The Wolverines handed the Hawkeyes their second straight title game loss and prevented coach Kirk Ferentz from capturing his first conference crown since 2004. Iowa lost to Michigan State in the 2015 title game and this one came on a night both quarterbacks, Spencer Petras and Alex Padilla, struggled against the Wolverines.

Cincinnati is ready to become the first non-Power 5 team to crash the College Football Playoff.

Jerome Ford rushed for 187 yards and two touchdowns and Desmond Ridder threw three touchdown passes as No. 3 Cincinnati broke open a close game in the third quarter and rolled past No. 16 Houston 35-20 in the American Athletic Conference championship game Saturday.

The Bearcats who are ranked No. 4 in the latest CFP rankings, are in position to become the first non-Power 5 team to qualify. The final rankings will be announced Sunday.

Cincinnati which extended the nation’s second-longest home winning streak to 27, scored three touchdowns in fewer than eight minutes to finish off its second straight AAC crown.

Dezmon Jackson came up inches short on a desperate, fourth-down dive in the final seconds for Oklahoma State, knocking the fifth-ranked Cowboys out of contention for a spot in the four-team playoff.

Baylor safety Jairon McVea knocked Jackson out of bounds without letting him reach the pylon with 24 seconds remaining in the Big 12 championship game Saturday, preserving a 21-16 victory for ninth-ranked Baylor.

The Bears’ win came a year after they went 2-7 in coach Dave Aranda’s debut last season.

The Cowboys rallied, going 89 yards on 17 plays on that final drive before their Big 12 and national championship hopes wound up just shy.