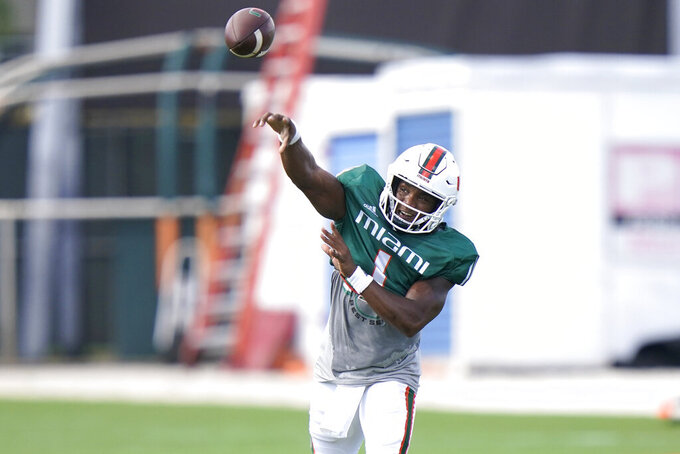 CORAL GABLES, Fla. (AP) — It was either the first or second day of Miami training camp. D’Eriq King was running a quarterback keeper. He planted his right foot in the turf, bent his surgically rebuilt knee, made a hard cut and took off.

And just like that, Miami’s offseason became a success.

Much of the hope that No. 14 Miami carries into this season — and Saturday’s season opener in Atlanta against No. 1 Alabama — is because of King, the sixth-year dual-threat quarterback who tore his right ACL in the Hurricanes’ bowl game against Oklahoma State last December. He vowed that he’d be back to face Alabama, and after seven near-constant months of rehabilitation he’s ready to go against the defending national champions.

King is on all the major watch lists that the top quarterbacks find their way onto: the Walter Camp Player of the Year, the Maxwell Award, the Davey O’Brien Award. He’s on pace to leave Miami as the Hurricanes’ career leader in completion percentage, no small feat at a place once known as “Quarterback U.”

“He executes their offense extremely well,” Alabama coach Nick Saban said. “He’s very comfortable in how he manages the game for them. He gets them in plays that have a great chance to be successful for them. And he’s a good decision-maker. ... This guy presents lots of issues because he’s a great player and a great athlete and he’s a great quarterback all rolled in one.”

To get here, King also had to be a great patient.

Having surgery on Jan. 4, seven months before training camp and eight months before the season opener, clearly meant there was no time to waste if King was to be ready to play against Alabama. He stayed overnight in the hospital after the surgery, and when he was discharged the next day was immediately taken by golf cart to the team’s training room.

“I did rehab for about four hours that day,” King said.

The rehab was intense and as a reward for good days, King would be allowed to go throw. Problem was, he couldn’t stand. So, to ensure that he wouldn’t damage the knee, someone would bring a stool onto the practice field, he’d take a seat and then fire off about 15 to 20 passes.

“It was almost like different stages of grief,” Miami coach Manny Diaz said. “At first, there was denial. ‘I’m not hurt that bad.’ And then there’s the anger. And then it was just time to move on to the next step. D’Eriq himself said he was angry for maybe a day or two, but then he put that aside and he got to work.”

It’s true: When King got hurt in the bowl game, he originally thought he dodged a bullet.

He went into the locker room area at the stadium in Orlando where the game was played, and after about a minute on an exercise bike he felt no more pain. He was jumping up and down. He was running. He wanted to go back into the game — it was never a realistic option since Diaz was told at halftime that it wasn’t a good idea — and the MRI the following day confirmed the ACL tear.

“Super, super frustrated,” King said. “I was down for two days. And then it was time for next steps.”

He decided before the bowl game that he was staying for another year — nobody lost a year of eligibility last year, the NCAA’s response to athletes playing through a pandemic — and his return played a role in many other draft-eligible Hurricanes deciding to stick around as well.

With King under center, Miami believes everything is possible.

He’s also doing business. King was one of the most sought-after — and most successful — athletes when it came to taking advantage of new rules that allow college players to profit off their name, image and likeness, even signing a deal with the NHL’s Florida Panthers.

And he’s overcome plenty on his way to success.

He made the decision to redshirt four games into the 2019 season at Houston and wound up seeking his graduate transfer — the path he took to Miami. Being that far away from family back home in Texas for the first time wasn't easy, and it quickly got much worse. Not even a month into his time at Miami, his father died.

“Tearing my ACL one of the last days of 2020, that wasn’t the worst thing that happened to me that year,” King said. “You can’t have the ‘poor me’ as I like to call them. ‘Poor me. Why is this happening to me?’ You can’t have them. You got to move on. There’s people that go hungry every day, people that have nowhere to stay, everybody goes through their own battles.

“And my dad, I still obviously haven’t gotten over it. I still think about it every single day. Me and my family are super, super close and I lean on them a lot. They helped me get through everything and we lean on each other.”

His football family at Miami works the same way. Whatever King needed for support during his six-day-a-week rehab regimen, often waking up at 4:30 a.m. to get things started, the Hurricanes provided.

And now, just like King promised teammates would be the case, he’s ready to face Alabama.

“It’s a big game,” King said. “It’s a big game for the university, for myself, for a lot of guys on our team. We’ve worked hard for this opportunity.”