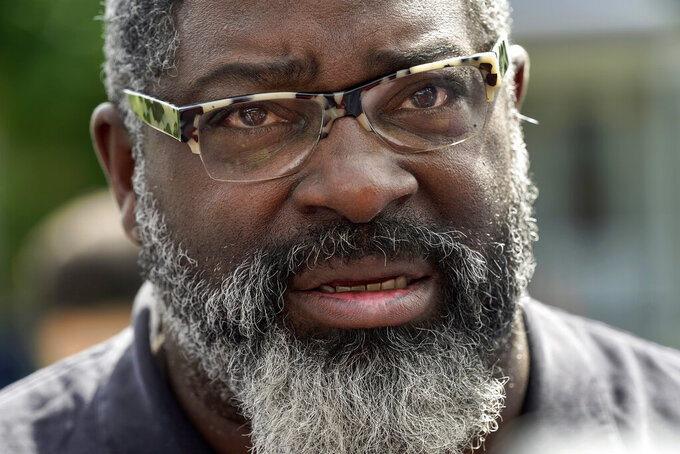 FILE - Jon Vaughn, a former University of Michigan football player speaks to the media in Ann Arbor, Mich., June 16, 2021. Vaughn's small blue-and-white camper, which has been parked outside the home of the University of Michigan's president since early October has been removed, Vaughn says. The former star running back for the university's Wolverines football team set up the camp to protest the sexual abuse he and more than 1,000 other students say they suffered at the hands of the university's late sports doctor Robert Anderson. (AP Photo/Paul Sancya, File)

ANN ARBOR, Mich. (AP) — The University of Michigan removed a camper, tent, signs and other items that represented a former football player's protest over the school's handling of sex abuse allegations involving a campus doctor, the school said Tuesday.

Jon Vaughn’s small blue-and-white camper had been parked outside the home of the university's president in Ann Arbor since Oct. 8. The former star running back is one of more than 1,000 people who say they were sexually abused by the university’s late sports doctor Robert Anderson over more than three decades.

“I don’t put anything past Michigan. Nothing surprises me. This is just an inconvenience. It doesn’t derail us,” Vaughn told The Associated Press. “I’m not angry. You expect a snake to bite you, you expect a liar to lie to you.”

University spokesman Rick Fitzgerald confirmed to the AP in an email that the university removed the items. In January, the school announced a $490 million settlement with Anderson's accusers.

“The trailer, tent and other items along South University Avenue have been removed by the university," Fitzgerald said. “All personal property has been placed in storage and may be reclaimed. We cannot comment further, pursuant to the ongoing confidential mediation and federal court orders.”

Vaughn said the university was aware that he was planning to remove the encampment Sunday. Vaughn first planned to host an event Saturday to commemorate his 52nd birthday that day and “say some goodbyes.”

“They already knew we were moving. My attorney called Michigan's internal and external attorneys last week,” Vaughn said. “So, they knew. What they did is underhanded. But this is also the university that covered up the greatest sexual assault/rape in the history of sports.”

Asked whether he would reconsider reconstituting the encampment, Vaughn said “nothing is off the table at this point considering what they just did."

Vaughn also said he is “really taking a hard look” at running for a seat on the university's Board of Regents.

Anderson worked as director of the university’s Health Service and as a physician for football and other athletic teams from 1966 until his retirement in 2003. He died in 2008.

In 2018, a former athlete made an allegation of sexual abuse against Anderson and police launched an investigation. In early 2020, five more former patients lodged accusations. It was then that a spokesman acknowledged that some university employees were aware of accusations against the doctor before 2018.

The university established a hotline in 2020 for students to come forward.

Vaughn, who played for the Wolverines during the 1988-90 seasons, said he was given 50 prostate exams by Anderson, the first when he was an 18-year-old freshman in 1988.

Vaughn rushed for more than 1,400 yards in two years and nine touchdowns in his final season with the Wolverines. In 1990, he was picked by the New England Patriots in the fifth round of the NFL draft. During a four-year NFL career, he also played for Kansas City and Seattle.