Fair meeting: No. 6 Oklahoma and No. 11 Texas for Golden Hat 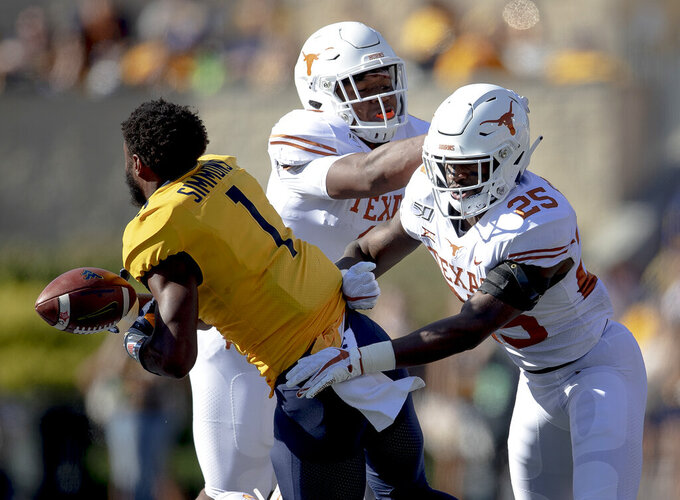 Along with bragging rights and the Golden Hat trophy, the winner of the Red River rivalry game takes a significant step toward a return to the Big 12 championship game — and there is the possibility of a December rematch for the second year in a row. The Longhorns won last October at the State Fair of Texas, but Oklahoma swept through the rest of the regular season. The Sooners beat Texas in the Big 12 championship game, winning their fourth league title in a row and making the College Football Playoff for the third time.

Texas safety B.J. Foster against Oklahoma QB Jalen Hurts. Foster is arguably Texas' most physical tackler in the secondary and he's primed for some collisions with Hurts, who has thrown for 304.6 yards and run for 99.8 yards per game. Foster has already said he's noted that Hurts invites contact and would be smart to slide to the ground against the Longhorns. Foster said Texas wants to make Hurts throw and could be a spy against him turning up field on his own.

Oklahoma: WR CeeDee Lamb averages 24.4 yards per catch and has caught a touchdown in seven consecutive games. That streak started in last year's Big 12 title game. He also had a TD against the Longhorns last October during another seven-game TD streak.

Texas: Sam Ehlinger has had 391, 386 and 384 total yards in his three games against Oklahoma — the three highest outputs by a Texas quarterback against the Sooners. He scored nine touchdowns (four passing, five rushing) against them in the two games last season.

This is the second year in a row both teams are ranked in the regular-season game, after five years in a row when only Oklahoma was ranked. ... The Sooners have scored at least 34 points in 15 games in a row, the third-longest streak nationally since at least 1980. ... Oklahoma's offense has only six more offensive snaps (324-318) than its opponents, but has outgained them by 1,487 yards (3,219-1,732).