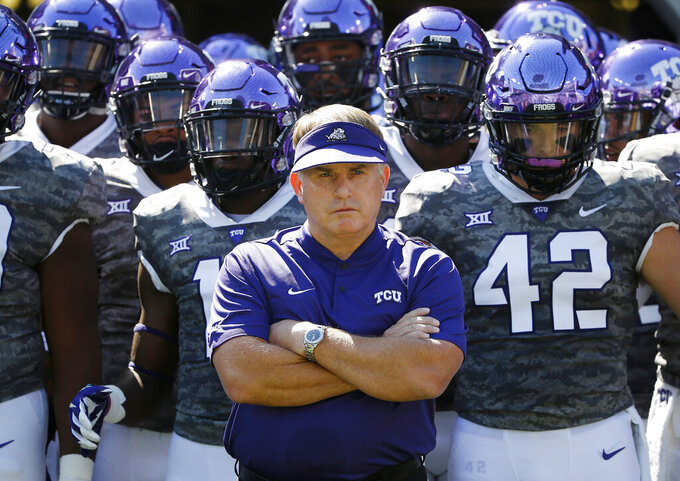 FILE - In this Saturday, Sept. 1, 2018, file photo, TCU head coach Gary Patterson stands with his team in the tunnel exit before running onto the field for an NCAA college football game against Southern University in Fort Worth, Texas. Coach Patterson is entering his 19th season at TCU coming off a 7-6 record that included an impressive late comeback, winning their last two regular season games just to get bowl eligible, and then won that game, after a season filled with injuries to so many key players. On defense, they have to replace three NFL draft picks. (AP Photo/Ron Jenkins, File) 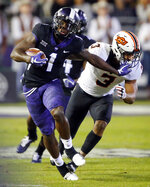 FORT WORTH, Texas (AP) — When TCU won its final two games to get bowl eligible last year, Jalen Reagor extended his record touchdown receiving streak while also running for a score in each game.

Reagor, who also took some snaps while lining up in different spots, wasn't even at full strength because of a nagging ankle injury.

"He was hurt. The last four games, he played about 70 or 80 percent," coach Gary Patterson said. "I don't think people even know how fast Jalen Reagor is."

Unlike many others, Reagor was able to stay on the field and contribute in a huge way. Patterson said about two dozen Frogs suffered season-ending injuries and many others missed multiple games.

Through all of that, and after a 3-5 start, the Frogs won three of four to get to the Cheez-It Bowl, then had another winning season after an overtime victory over California.

"That was big for us ... know that we almost hit rock bottom, and we still rose to the occasion," linebacker Garret Wallow said.

While Reagor was then among several starters who missed at least part of spring practice, he is back healthy. So are key defenders like veteran safety Innis Gaines, who played only a half season before a knee injury, and tackle Ross Blacklock, who tore an Achilles tendon in a non-contact drill last preseason.

Reagor had TD catches in seven consecutive games during a 1,000-yard receiving season. He accounted for 30% of TCU's receptions (72 of 239), the best in the Big 12 and highest under Patterson, who is going into his 19th season. The Frogs could use more of the same from the son of a former NFL defensive tackle.

"I don't look at it as pressure," Reagor said. "I feel like I'm supposed to be here."

TCU opens the season at home Aug. 31 against Arkansas-Pine Bluff, then has an open date before going to Purdue.

Alex Delton is the most experienced TCU quarterback, through the graduate transfer's six starts came the past two seasons at Kansas State. Mike Collins, the former Penn transfer, started four games last year as a sophomore before a right ankle injury late in the season. There are also two highly touted freshmen: dual-threat QB Justin Rogers got one series in the bowl game, and Max Duggan was an early enrollee who took part in spring practice. The NCAA denied Texas native and Ohio State transfer Matthew Baldwin from being eligible to play immediately this season.

Running back Sewo Olonilua, who set a school bowl record with 194 yards rushing in the Cheez-It Bowl, was arrested in May on possible drug charges. Preseason practice started with the case still pending in Walker County. Patterson said Olonilua would practice and that there would be discipline from the TCU "no matter how his deal turns out.

"The kid graduated in four years, he's been good here. Screwed up," the coach said. "Always a price one way or another that has to be paid."

TCU limited defensive end Ochaun Mathis to four games last season so the freshman could keep that year of eligibility. The 6-foot-5, 235-pound Mathis now gets a chance to have a big impact. LJ Collier and Ben Banogu, last year's starting ends, went in the first two rounds of the NFL draft.

NOT WHAT YOU THINK

The team motto "Earn the Chip" has nothing to do with the Frogs having a chip on their shoulder.

"Earn the right to wear purple and the black," Patterson clarified, saying that about 700 players have been through the program since he arrived as defensive coordinator 22 years ago. Former Frogs like Pro Football Hall of Fame running back LaDainian Tomlinson are in their 40s. Clips of former players and standout moments have been featured this preseason to show "what it means to play and be at TCU."