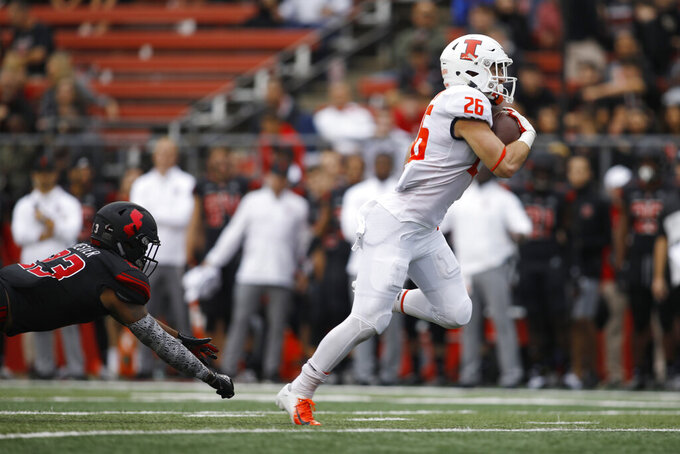 FILE - In this Oct. 6, 2018, file photo, Illinois running back Mike Epstein gets away from Rutgers defensive back Kiy Hester on the way to a touchdown during the second half of an NCAA college football game in Piscataway, N.J. Epstein is back this year and ready to go, head coach Lovie Smith said. (AP Photo/David Boe, File)

After ending last season at 4-8, Smith and the Illini can't help but also feeling a bit encouraged.

"This is so exciting," Smith said as Illinois prepares to open its season Saturday against Akron at home. "Camp went well for us."

Illinois is looking to build on its limited success last year, when the Illini showed signs of turning a moribund team around even with a 2-7 mark in the Big Ten. They return the core of a good rushing offense, including running back Reggie Corbin who piled up 1,085 yards and averaged 8.5 per carry.

Running back Mike Epstein also could prove problematic for opponents. Last season, Epstein averaged 6.8 yards per carry on 60 carries, and is capable of breaking a long run at any given moment.

First-year Akron coach Tom Arth is banking on his team putting up a good showing against a Big Ten opponent on opening day.

"I'm so proud of what this team accomplished in camp," Arth said. "Regardless of what happens on Saturday. Am I nervous? Well, this is my seventh year as a head coach, and I was nervous the first game. Honestly, right now I just feel at peace and confident."

Despite the losses, Akron returns 2018 All-MAC linebacker John Lako and defensive back Alvin Davis, who returned two interceptions for touchdowns in a win over Northwestern last season.

"Unfortunate," Smith said. "He was one of the highlights of the fall practices early on. He eventually will play four years for us and is going to be a great player."

Beason, a top-100 prospect in the Class of 2019, is the highest-ranked prospect to sign with Illinois since 2009 and chose Illinois over Texas A&M, LSU and Ohio State, among others.

Both teams have settled on starting quarterbacks. Graduate transfer Brandon Peters from Michigan got the nod from Illinois two weeks ago, while four-star freshman Isaiah Williams, sophomore Matt Robinson and redshirt freshman Coran Taylor are ready if needed.

"Anything can happen," Smith said. "I've been doing this a long time and I know that one play can change everything. So it helps to be prepared and to have talent like we have to step in if needed."

Akron starter Kato Nelson guided the Zips to a 2017 MAC East title and MAC championship game appearance. Nelson will need to improve his completion percentage (51.5 in 21 games) in 2019, which should happen with the .pro-style offense Arth is utilizing.

"Kato looks good, and we are thrilled at the improvements of our offensive line," Arth said. "We'll go as they go. The O line is the heart and soul of our team."

Illinois ranked 113th in the FBS in pass yardage allowed in 2018, while Akron is poised for improvement in the passing game for 2019. One of the Zips' key targets is speedy wide receiver Andre Williams, who caught 46 passes for 649 yards and six touchdowns last year.

WHAT TO WATCH FOR

With Smith assuming the defensive play calling this season, his specialty going back to his NFL coaching days, all eyes will be on the Illini defense.