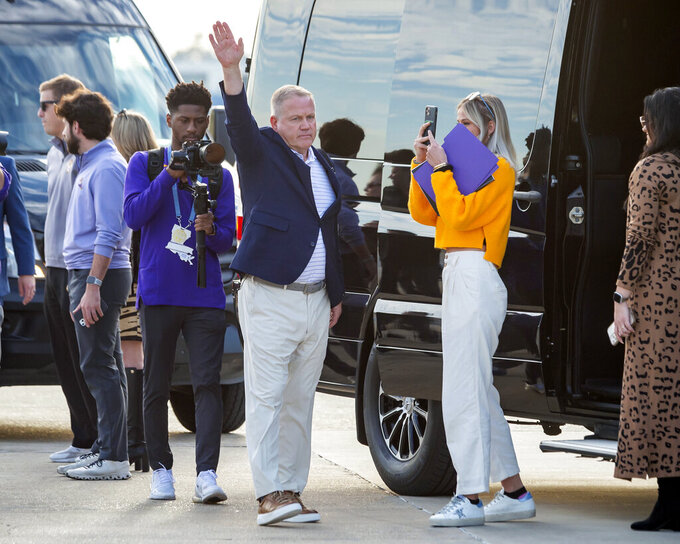 New LSU football coach Brian Kelly waves to fans after his arrival at Baton Rouge Metropolitan Airport, Tuesday, Nov. 30, 2021, in Baton Rouge, La. Kelly, formerly of Notre Dame, is said to have agreed to a 10-year contract with LSU worth $95 million plus incentives. (Scott Clause/The Daily Advertiser via AP)

BATON ROUGE, La. (AP) — Newly hired LSU coach Brian Kelly can accept if his legacy at storied Notre Dame is tarnished by the sudden and unceremonious way in which he walked away from the Fighting Irish.

“Legacies are not what I spend time thinking about," Kelly said during his formal introduction at LSU on Wednesday. “I came down here because I wanted to be with the best.

“You’re looked at in terms of championships here. And I want that,” Kelly continued. “I want to be under the bright lights. I want to be on the Broadway stage. That’s what my passion is. So, yeah, that’s part of the draw. There’s no doubt about that.”

Kelly said he had no notion of leaving Notre Dame heading into the season and believes he could have finished his career there.

Indeed, Kelly had only good things to say about Notre Dame and the players there that he left behind when he decided to become the first coach to voluntarily leave the Fighting Irish for another job since The AP Poll was launched in 1936.

Kelly left a team that went 11-1 this season and which would have a good chance to get into the four-team College Football Playoff for third time in four years if Alabama and Cincinnati lose their respective conference title games this weekend.

“I can't say enough about my 12 years at Notre Dame,” Kelly said. "Those young men I love dearly and it made for a difficult decision. But when I was able to look at it and the opportunity here ... I believe I can make a significant difference here and you want to be able to make a difference.”

Kelly was 113-40 as a head coach at Notre Dame, including a current run of five straight double-digit victory seasons. His overall coaching record is 166-62 over 18 seasons in major college football. He also won Division II national titles twice at Grand Valley State.

When LSU athletic director Scott Woodward introduced Kelly inside a theater-style meeting room under the north stands in Tiger Stadium, he highlighted Kelly's record of sustained success at every stop and proclaimed him “the most accomplished and successful football coach this program has ever hired."

“Success follows him every where he goes,” said Woodward, who lured Kelly with a 10-year contract offer worth $95 million plus incentives.

Kelly declined to discuss any plans to regarding the assistant coaches who've remained at LSU since Ed Orgeron stepped down following the Tigers' regular-season-ending victory over Texas A&M. At 6-6, LSU is expected to get a bowl game, and Kelly said he wasn't yet sure whether he'd ask to coach in it. He also didn't discuss whether he'd ask assistants at Notre Dame to follow him to Baton Rouge.

As for recruiting, Kelly said his priority is trying to retain players who've committed to play for LSU before he worries about whether anyone he recruited to Notre Dame might be interested in playing in Death Valley instead.

“Let's take care of our base,” Kelly said.

While Kelly has never coached in the South, he's had some recruiting success in the region while at Notre Dame, including in Louisiana. Current Notre Dame freshman running back Logan Diggs is from the New Orleans area, for example.

But Kelly noted, "You have to work really hard to get someone to leave the state of Louisiana, so that bodes really well for us.”

Kelly said the alignment of Woodward and LSU President William Tate's vision for the football program, the resources LSU dedicates to football, and the quality of the facilities all made taking over the Tigers attractive to him even if they didn't play in the SEC. But the fact that LSU also is a historical power in what has been the most successful conference in college football for most of the past two decades made it even more attractive.

“The SEC, we know about its prowess," Kelly said. “The SEC has obviously an ability to continuously turn out great football teams based upon a commitment from the university, great recruiting, great coaches ... and they’ve earned it by what they've done on the field. So, everything they’ve gotten, they’ve deserved.”

Now Kelly gets to coach annually against the likes of Alabama's Nick Saban, Texas A&M's Jimbo Fisher and Mississippi's Lane Kiffin in the SEC's West Division. So if Kelly wins at LSU, he'll have earned it.