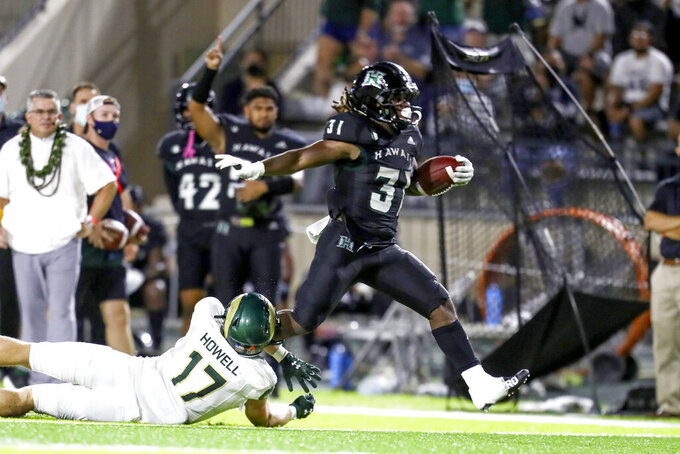 Hawaii running back Dedrick Parson (31) breaks free from a diving Colorado State defensive back Jack Howell (17) before running the ball into the end zone to score a touchdown during the second half of an NCAA college football game, Saturday, Nov. 20, 2021, in Honolulu. (AP Photo/Darryl Oumi)

The NCAA football oversight committee on Thursday approved a waiver to the deadline for bowl certification so another game can be added to this season's lineup, upping the number to 42 and ensuring all teams that finished 6-6 can play in the postseason.

The additional game, likely to be held in Texas, was a late replacement for the bowl that was scheduled to be played in San Francisco this season. The Redbox bowl was canceled in early September.

“This is utilizing an existing license that was held by the San Francisco bowl,” Mid-American Conference Commissioner Jon Steinbrecher said.

The MAC, Mountain West and Conference USA made the waiver request.

After last Saturday's games, there were 83 bowl eligible teams, not including Hawaii, which finished 6-7.

With 41 games, one eligible team would have been left out, most likely one from the MAC or C-USA. Now all the 6-6 teams can participate and there will be room for Hawaii, too. NCAA rules allow 6-7 teams to be eligible for bowl selection if there are no available 6-6 teams.

Having Hawaii bowl eligible allows the Rainbow Warriors to play in the Hawaii Bowl.

The Mountain West, Hawaii's conference, holds an agreement with the Hawaii Bowl, which has already invited Memphis from the American Athletic Conference.

Having Hawaii eligible to play in its home game is a cost saver for whichever Mountain West school would have otherwise been selected to fill that slot.