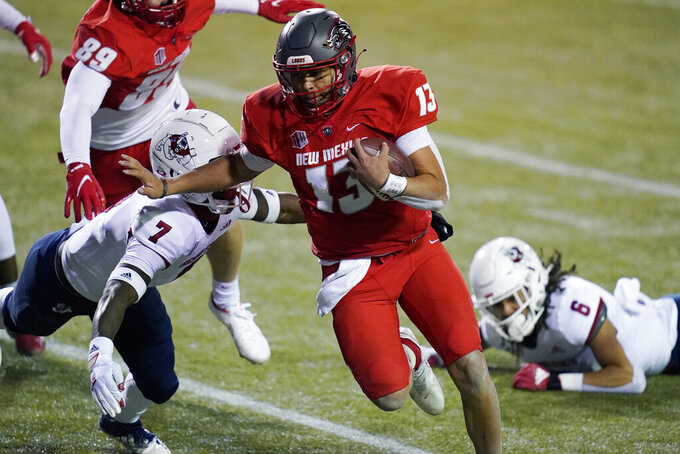 PHOENIX (AP) — New Mexico State relocated to Arizona in an attempt to play a basketball season. Restrictions in the Aggies' home state made it impossible for them to even practice there, so they packed up and moved into a Phoenix resort.

The pandemic had other plans.

Hamstrung by COVID-19 issues inside and out of the program, New Mexico State has played three games so far this season — only one since Dec. 1. It's not exactly the payoff the Aggies had hoped for when they opted to leave their family and friends behind in an attempt to play basketball.

“The thing people forget, lives are going on back home and they’ve had stuff happen to them that I’m not going to get into,” New Mexico State coach Chris Jans said. “Really bad stuff, tragedies and they’ve had to deal with these tragedies It’s been quite an ordeal.”

A big hurdle has finally been cleared for the Aggies and the other teams from New Mexico that have relocated during the pandemic.

The office of New Mexico Gov. Michelle Lujan Grisham announced Tuesday that the state had amended its COVID-19 guidelines to allow college sports teams to practice in the state. The guidelines previously prevented gatherings of more than five people, making it impossible for teams to practice.

Guidelines for games did not change, so the teams still have to sort out where they'll play, but at least they can head home.

“I'm very thankful that our coaches and student-athletes will get back to some sense of normalcy," New Mexico State athletic director Mario Moccia said.

New Mexico's football team moved to Henderson, Nevada, and completed a seven-game season this fall. The men's and women's basketball teams relocated to the Texas Panhandle.

New Mexico State's two basketball programs moved to Arizona. The men have had eight games canceled or postponed due to COVID-19 issues and paused all team activities on Jan. 4 due to multiple positive tests within their program. The women's team also had to pause all activity due to a positive test last weekend.

“This wasn't our choice. We didn't choose to come to Phoenix and stay at the Arizona Grand and try to play a basketball season during a pandemic,” Jans said earlier this week. “I'm very proud of our team, our program for how they're handling this situation. I'm with them every day. They've been very resilient.”

Moccia and New Mexico AD Eddie Nunez had been working behind the scenes with their respective staffs in preparation for an eventual return to their home states.

New Mexico's women's team moved quickly once the news hit, returning to Albuquerque on Tuesday. The men's team, which has played 12 games at a variety of sites, will remain in St. George, Utah, to play San Jose State at Dixie State University this weekend before returning home.

The New Mexico State basketball teams are expected to return to Las Cruces after their quarantine periods are over. The men's team is hoping to be cleared in time to play two games against Grand Canyon next week and the women are scheduled to play back-to-back games at California Baptist Feb. 5-6.

“Eddie and I were friends long before we had these jobs,” Moccia said. “But I've talked to him more than I ever thought I would talk to a rival athletic director.”