No. 1 Georgia braces for challenge against Tennessee offense 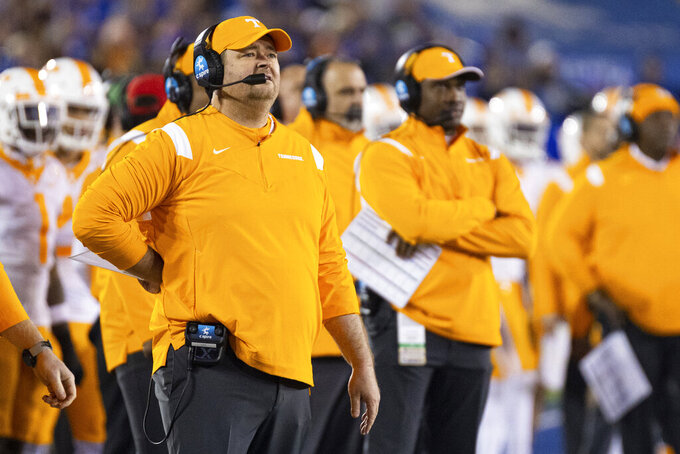 Tennessee head coach Josh Heupel watches the video board during the first half of an NCAA college football game against Kentucky in Lexington, Ky., Saturday, Nov. 6, 2021. (AP Photo/Michael Clubb)

At least that’s what the Volunteers are counting on.

As the Bulldogs (9-0, 7-0, No. 1 CFP) prepare for their final Southeastern Conference game, they will be challenged Saturday by an attack that can score points in a hurry. The Vols scored 38 points while holding the ball less than 14 minutes in last week’s 45-42 upset of then-No. 18 Kentucky.

Just practicing for Tennessee's offense is a challenge.

“It’s so fast you can’t really simulate it in your practices, so you have to try and find a creative way to practice for it,” Georgia coach Kirby Smart said. “It’s so different than the triple option, I’m not trying to compare it to that, but it’s so different that it’s hard to prepare for.”

First-year coach Josh Heupel has put a premium on Tennessee (5-4, 3-3) making it difficult on the opponent in the first quarter. Tennessee has outscored opponents 138-37 in the first 15 minutes.

Another quick start would put Georgia in a rare situation. The Bulldogs have trailed only twice all season after early field goals by both Auburn and Missouri. After Missouri went up 3-0, Georgia scored the next 40 points and won 43-6 last weekend.

As fast as Tennessee plays, the defense is on the field a long time. The Vols, who've scored at least 14 points in each of their SEC games, are last in the league ball possession, averaging only 24 minutes, 3 seconds of possession per game. Heupel cares about time of possession only when it matters.

After missing four games with a lat injury, quarterback JT Daniels finally got back on the field last week against Missouri. Daniels, who began the season as Georgia’s starting QB, completed 7 of 11 passes for 82 yards against Missouri, with one touchdown and one interception.

The Bulldogs could start rotating quarterbacks, though Stetson Bennett seems locked in as the starter after emerging as one of the biggest surprises of the season.

The former walk-on started out third on the depth chart. He has completed 66.7% of his throws for 1,412 yards, 14 touchdowns and four interceptions. He also runs well, averaging 7.1 yards on 27 carries. He's among 20 semifinalists for the Davey O’Brien Award presented to the nation’s best quarterback.

Four Tennessee receivers had big plays last week against Kentucky. JaVonta Payton (75 yards), Velus Jones (72), Jalin Hyatt (41) and Cedric Tillman (37) all made impacts with Payton and Jones each scoring TDs on their catches.

On the other end is Hendon Hooker. The graduate transfer from Virginia Tech has thrown 19 TD passes with only interception since taking over as the starter. He threw for a career-best 316 yards and four TDs last week.

Georgia has allowed just 59 points all season for an average of 6.6 points a game — best in the nation. That puts this group is some pretty elite company.

The last time the Bulldogs surrendered so few points through nine games was 1971, when they gave up 53. In their 10th game of that season, they sustained their only loss, falling 35-20 to an Auburn team led by Heisman Trophy winner Pat Sullivan. They finished 11-1 while giving up 115 points (10.5 per game).

This defense has allowed only five touchdowns, while scoring three TDs off turnovers. They haven't allowed more than 13 points in a game all season.

Tennessee is back in Neyland Stadium for the first time in 28 days — three road games and an open date. The last time the Vols played at home, they lost to Ole Miss in a game that had a miserable ending. Fans littered the playing surface with debris, stopping the game upset with calls made by the officials.

The SEC fined Tennessee $250,000 and ordered the university to punish anyone identified on video throwing trash onto the field.