No. 12 Florida takes on No. 20 Kentucky in SEC East showdown 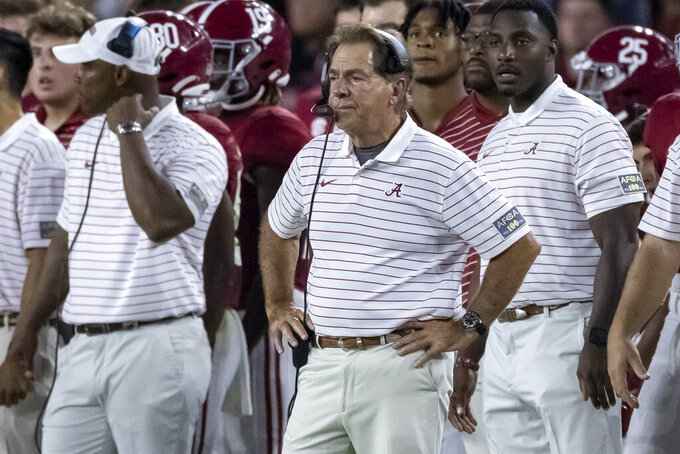 Things to watch in Week 2 of the Southeastern Conference:

No. 20 Kentucky visits No. 12 Florida in a matchup of ranked SEC teams. The league opener for both teams matches schools picked to finish second and fourth respectively in the East Division in preseason media poll. Kentucky opened with a 37-13 victory over Miami (Ohio) but faces an uphill battle in The Swamp in its quest for a second consecutive series win over the Gators. The Wildcats will again be without first team All-SEC rusher Chris Rodriguez Jr. (1,379 yards, nine touchdowns last season) as the administration determines discipline for an undisclosed matter. Senior Kavosiey Smoke will start in the backfield, but Kentucky seeks more than its 50 yards rushing on 26 carries against the Redhawks. Florida re-entered the rankings for the first time since October following an impressive 29-26 home upset of then-No. 7 Utah in Billy Napier’s debut as Gators coach. Quarterback Anthony Richardson got it done with his feet and arm, rushing for 106 yards with a career-best three scores and passing for 168 more yards. The teams are meeting for just the second time in 70 years ranked in the AP Top 25.

No. 1 Alabama at Texas. The host Longhorns (1-0) are in rebuilding mode under second-year coach Steve Sarkisian, but the history of traditional college football heavyweights and future SEC foes makes this non-conference meeting in Austin intriguing. Not to mention, its rarity: the teams are meeting for the first time since the Crimson Tide earned their first series win (37-21) in eight tries in the BCS Championship Game after the 2009 season. It’s also the first regular season meeting in a century. Sarkisian faces his former team, which he helped guide to the College Football Playoff championship in 2020 as Nick Saban's offensive coordinator during a two-year stopover in Tuscaloosa. However, history works against Sark beating his former 'Bama boss, who is 25-2 against ex-Tide assistant coaches.

Linebacker Khari Coleman invaded Troy’s backfield often in his debut with No. 22 Mississippi last week, recording five tackles for loss with two sacks among eight stops in the Rebels’ 28-10 victory. The junior transfer from TCU ranks fifth nationally in sacks, and he’s just the third Ole Miss player since 1999 with five TFL in a contest.

Georgia safety Christopher Smith intercepted a pass in his second consecutive opener and had six tackles as the defending national champion and No. 2 Bulldogs thumped then-No. 11 Oregon 49-3. ... Alabama passed for 281 yards and rushed for 278 in its 55-0 opening-game shutout of Utah State. ... No. 24 Tennessee tied a school record for consecutive games scoring 45-plus points in its 59-10 rout of Ball State. ... Mississippi State QB Will Rogers completed passes to 12 receivers against Memphis, hitting five for TDs. ... Volunteers quarterback Hendon Hooker has 13 consecutive games with a TD pass, five behind program leader Heath Shuler. ... Kentucky receiver Tayvion Robinson debuted with six catches for a career-high 136 yards and including 103 after the catch. ... Wildcats teammate Barion Brown, a freshman scored his first career TD on a 100-yard kickoff return to start the second half against Miami.

FanDuel.com lists Vanderbilt (2-0) as a 12.5-point underdog at home against No. 23 Wake Forest (1-0) in a non-league game. The Commodores have clicked offensively so far, scoring 42 or more points in consecutive contests for the first time since 2005, including 63 at Hawaii. Their start should provide confidence this weekend, though it’s worth noting that the Demon Deacons got a boost this week when QB Sam Hartman was medically cleared to return after being treated for a blood clot.