No. 15 Coastal Carolina seeks to remain unbeaten vs Troy 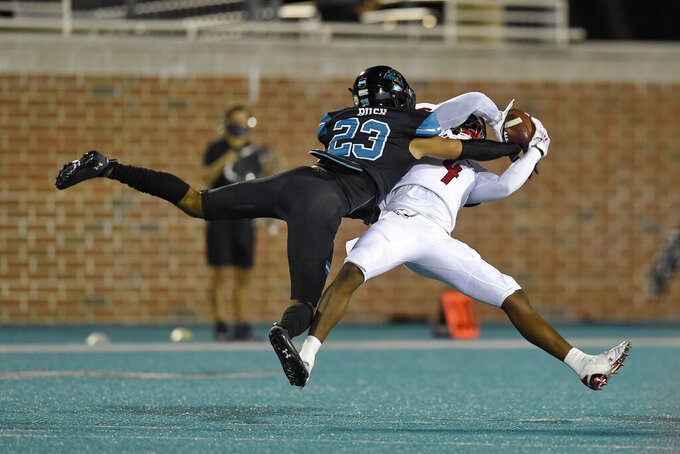 Coastal Carolina can secure the best start in Sun Belt history with a win and ensure a fifth straight week in the rankings. The Trojans can get a rare win over a Top 25 team and avenge last season's difficult defeat. The Chanticleers won that game 36-35 when CJ Marable rushed for a 3-yard touchdown with 30 seconds left and added the two-point conversion.

Troy's passing offense against Coastal Carolina's defense. The Trojans rank second in the Sun Belt in passing behind QB Gunnar Watson, averaging 302.3 yards per game. Watson's status is uncertain with an upper body injury and Jacob Free has started the past two games. The Chanticleers have the league's stingiest defense against the pass and rank 10th nationally. They're allowing just 174.9 yards per game along with six passing touchdowns.

Coastal Carolina: Grayson McCall leads the league in total offense and ranks second in passing. He has thrown for 16 touchdowns against just one interception.

Troy: LB Carlton Martial is the defensive leader and ranks among the tops in the Sun Belt with 55 tackles and 7.5 stops behind the line of scrimmage.

The game was moved from ESPNU to ESPN2 with other games being postponed or canceled. ... Coastal Carolina's 7-0 start matches Appalachian State's opening last season as the best start in Sun Belt history. ... The Chanticleers are the highest ranked team to play in Troy and only the fourth Top 25 opponent to visit the Trojans. It's the third straight season a Top 25 team has visited the Trojans, including No. 22 Boise State (2018) and No. 22 Appalachian State (2019). ... Coastal Carolina's defense hasn't allowed a touchdown in the last 10 quarters. ... It's the earliest starting time for a Troy home game since 2002 against Utah State. .. The Trojans have scored a nation's best four defensive touchdowns, all coming in the last three games.