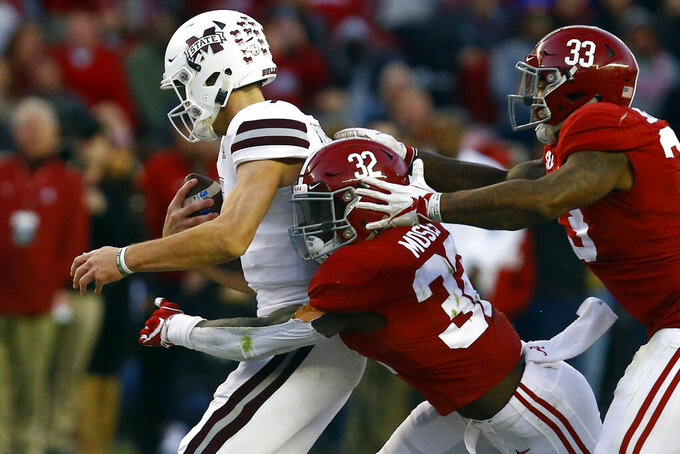 FILE - In this Nov. 10, 2018, file photo, Mississippi State quarterback Nick Fitzgerald (7) is sacked by Alabama linebacker Dylan Moses (32) and linebacker Anfernee Jennings (33) during the second half of an NCAA college football game, in Tuscaloosa, Ala. The hits keep on coming for Alabama’s defense in 2019. The latest blow to the second-ranked Crimson Tide defenders was Tuesday’s, Aug. 27, 2019, knee injury to star middle linebacker Dylan Moses. (AP Photo/Butch Dill, File)

The latest blow to the second-ranked Crimson Tide defenders was Tuesday's knee injury to star middle linebacker Dylan Moses that likely sidelined the defensive play caller and leader for the season. Fellow starting inside linebacker Joshua McMillon was also knocked out of the lineup with a knee injury in preseason camp at another position where there was already scant experienced depth.

It has left this Alabama defense a work in progress going into Saturday night's opener with Duke, though there's never a shortage of talent in Tuscaloosa. It's a unit that started the year getting rocked by Clemson in the national championship game then lost a number of key players to the NFL draft .

The Tide is expected to start three freshman defenders against the Blue Devils. Christian Harris has already moved atop the depth chart to replace McMillon. Shane Lee is the likely candidate to replace Moses and nose guard D.J. Dale is manning the position vacated by No. 3 overall NFL draft pick Quinnen Williams.

"It's definitely crazy," Alabama defensive end Raekwon Davis said. "When I came in, there wasn't really an opportunity for a freshman to really just play like that."

Circumstances have changed thanks to the attrition of injuries and the NFL. Losing Moses, a Butkus Award finalist last year, in practice just days before the season is especially challenging.

That means Lee will have the play calling burden in his first college game.

"I think that's what we do every day," he said. "We try to get these guys prepared every day. They know they're always one play away from having to be in a game. Fortunately for the guys that we have as backup linebackers they have been good students of the game.

"I think they've really tried to prepare themselves the right way, where sometimes you get guys that if they're not playing, they have a hard time focusing because it's the first time they haven't been the guy that's going to go out there and play. So it makes it a little more difficult for them."

It's far from a doomsday scenario. Alabama still has two key defenders — linebacker Terrell Lewis and cornerback Trevon Diggs — back from injuries. Lewis and his backup Christopher Allen missed all of last season with knee injuries while Diggs was sidelined by a foot injury at midseason.

Lewis and Allen will bolster a pass rush along with defensive ends LaBryan Ray and Davis, who returned for his final season after a disappointing performance as a junior. Davis's sack totals dipped from 8.5 as a sophomore to 1.5 last season.

Plus, unlike some Alabama teams of the past, this defense doesn't have to carry the load. The Tide also has quarterback Tua Tagovailoa and an offense that topped 50 points eight times last season.

Still, it's hard to overstate the potential impact of losing Moses.

"I think it's a character check for Dylan in terms of the support that we want to give him and the adversity that he has to overcome," Saban said. "But it's also a character check for everybody on our team to be able to keep the faith, to respond to adversity the way they need to, to accept the challenge and to rise above the challenge. Support each other. Support young players that are going to have to play.

"And just kind of go from there. That's the only choice we have."