No. 2 Clemson heavily favored in ACC matchup vs Louisville 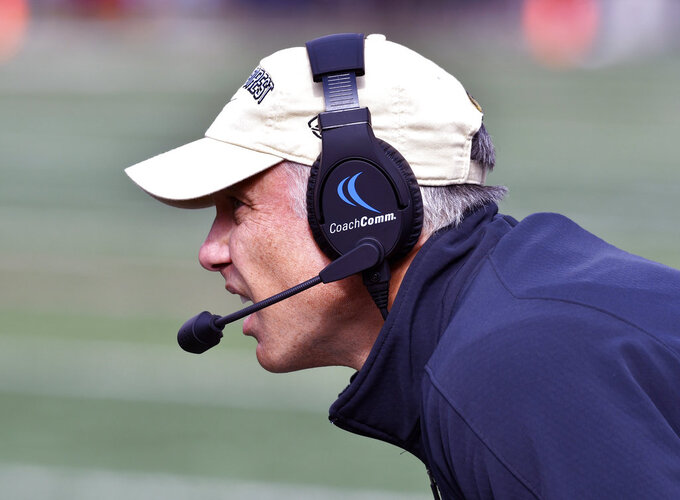 CLEMSON, S.C. (AP) — No. 2 Clemson has not been challenged the past month and struggling Louisville looks to be overmatched heading into Saturday's matchup with the Tigers.

Clemson coach Dabo Swinney isn't buying it, and doesn't want his team to buy into thinking Saturday's game against the Cardinals will be a cake walk.

"This is not a 2-6 football team," Swinney said of Louisville. Their record "is not indicative of the talent they have on this team."

Despite Swinney's concerns, Louisville (0-5 in the ACC) likely won't be able to contain the surging Tigers .

Clemson has won its past three games by a staggering combined score of 163-20. The Tigers ran over then-16th-ranked North Carolina State, 41-7, turning a showdown between the league's last remaining undefeateds into a rout. They followed that with a 59-10 drubbing of Florida State, finishing with the most points the Seminoles ever allowed at Doak S. Campbell Stadium.

"They're a really good football team," said Louisville coach Bobby Petrino, sounding like a coach without many options.

He went on to say the Cardinals must try and stop the two things Clemson's offense does well "and that's run the ball and throw it."

Louisville has been one of Clemson's toughest opponents in the team's first three meetings after joining the ACC; the Tigers won those three by a touchdown or less.

The Cardinals had hoped, with Heisman Trophy winner Lamar Jackson leading the way and the game at home last year, they would ready to finally take down the Tigers. Instead, Clemson put on a dominant show in a 47-21 win over No. 14 Louisville.

And this latest matchup could be even more lopsided.

Some other things to watch when Louisville visits No. 2 Clemson on Saturday:

Clemson's run through October coincided with the elevation of freshman quarterback Trevor Lawrence as starter. Lawrence had passed for 797 yards, seven touchdowns and zero interceptions in the past three victories. He threw four touchdowns in dominating Florida State victory. Lawrence said he's gotten more comfortable in his position since taking over the starting job from veteran Kelly Bryant, who has since announced his intention to transfer.

Louisville faces No. 2 Clemson after opening the year against No. 1 Alabama. It's the first time the Cardinals have played the country's top two teams. Louisville fell to the top-ranked Crimson Tide 51-14 in a game played in Orlando, Florida to start the season.

Clemson defensive tackle Christian Wilkins game some more headlines last week with his 1-yard TD run in the rout of Florida State. It was part of the Tigers' "Fridge Package," named after ex-Clemson and Chicago defensive lineman William "Refrigerator" Perry, that had 340-pounder Dexter Lawrence at fullback leading the way with Wilkins behind. Wilkins had a touchdown reception against Troy in 2016. He said he's looking for more offense this year. "You've got to get the heavy running back in there," Wilkins said. "I'm the sixth-string running back, but I was able to get it done. I was ready for it."

Louisville has struggled this season and is hoping to stop a five-game losing streak. The Cardinals have not lost six in a row since dropping 10 straight games in in the 1997 and 1998 seasons. Louisville dropped its final eight games in 1997 to finish 1-10 under coach Ron Cooper. The team lost its first two games the next season with John L. Smith in charge and current head coach Bobby Petrino as offensive coordinator.

When Clemson runs down its hill into Memorial Stadium, it will mark the 400th such entrance in school history dating back to 1942. The tradition has been constant ever since, except for the 1970-71 seasons, the first four home games of 1972 and the opening home game in 1973.