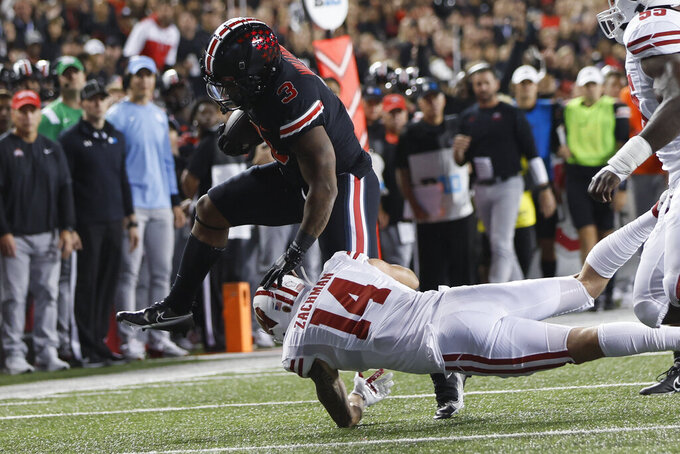 C.J. Stroud threw five touchdown passes, and both top running backs had 100-yard games as the Buckeyes blew by Wisconsin early and cruised to a 52-21 win on Saturday night.

“I thought the tempo and the mix of run and pass today is what we’re looking for,” Ohio State coach Ryan Day said.

The Buckeyes (4-0, 1-0 Big Ten) controlled the line of scrimmage and scored touchdowns on their first four drives on the way to a 31-7 halftime lead. Wisconsin could only slow them down after that but didn't get closer than 21 points.

TreVeyon Henderson rushed for 121 yards, and Williams averaged more than 9 yards per carry in rumbling for 101.

“We know how long the season is going to be,” Day said. “When you have two guys going back and forth and back and forth who are unselfish, who understands what it is to be a team, that’s the key.”

Stroud completed 17 of 27 attempts for 281 yards, and also threw an interception for the first time this season. He has 16 touchdown passes in four games.

Egbuka caught scoring passes of 32 and 8 yards, finishing with 118 yards. Julian Fleming also caught a touchdown pass for the Buckeyes.

“In the first half we distributed the ball pretty well, had some good momentum coming out quick, and that’s something we definitely want to do,” Stroud said.

Wisconsin quarterback Graham Mertz was 11 for 20 for 94 yards, rushed for a touchdown and threw for another. Braelon Allen rushed for 165 yards, including a 75-yard TD romp in the fourth quarter against Ohio State backups.

“We really didn’t get off to a good start,” Wisconsin coach Paul Chryst said. “We didn’t respond on the field the way we needed to.”

The TD catches were the first for Stover, a tight end in his fourth year who has also played defensive end and linebacker for the Buckeyes. His first was on a 13-yard toss, two plays after after Ohio State safety Tanner McCalister picked off Mertz.

Later the 6-foot-4, 255-pounder caught a 2-yard scoring pass to put the Buckeyes up 21-0 before the end of the first quarter.

“That's a tough prideful program,” Stover said. “That's what they're known for. For us to do that, go out there and really force our will on those guys, we're making a step in the right direction.”

Wisconsin: The Badgers (2-2, 0-1) were expected to put up more of a fight in the first Big Ten game for both teams. Instead, they got hit early and couldn't recover.

“We had a solid plan going in, but (there were) a lot of plays that we left on the table,” Wisconsin linebacker Nick Herbig said.

Ohio State: Stroud completed his first eight passes on the way to another outstanding performance. The Heisman favorite again was exceptional taking advantage of what the defense gave him, and the combination of Williams and Henderson carrying the ball kept Wisconsin off balance.

With a good showing against a conference opponent, Ohio State should stay put.

Wisconsin: Jack Nelson, Wisconsin’s starting left tackle, was unavailable due to an illness.

Ohio State: WR Jaxon Smith-Njigba, who has seen limited time on the field since a hamstring injury in Week 1, was out. Both starting cornerbacks, Denzel Burke and Cam Brown, were unavailable. Burke had his right hand either in a cast or wrapped in warmups. Brown left last week’s game with an unspecified injury.

Wisconsin TE Clay Cundiff was hurt again, carted off the field with an apparent leg injury late in the first half. Cundiff suffered a season-ending injury on Oct. 30 last season — a dislocated ankle, broken fibula and torn deltoid. He worked his way back and caught both scoring passes in the Week 2 loss to Washington State.

By W.g. Ramirez an hour ago
By Mark Anderson 2 hrs ago
By Raul Flores 2 hrs ago
By Stephen Hawkins 3 hrs ago
4 hrs ago