No. 7 Auburn remembers getting 'embarrassed' by MSU 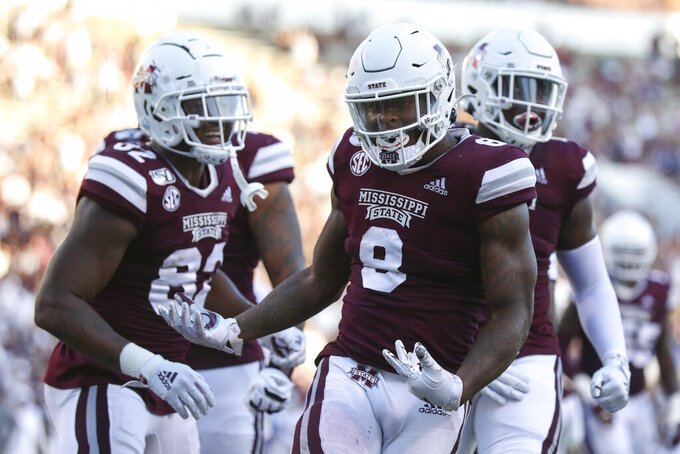 AUBURN, Ala. (AP) — The Auburn Tigers only have to look back to avoid looking ahead.

The seventh-ranked Tigers host a Mississippi State team Saturday night that "embarrassed" them last season. That memory is presumably enough to keep Auburn (4-0, 1-0 Southeastern Conference) from peeking past this game toward a visit to No. 9 Florida.

"They definitely embarrassed us last year," Tigers defensive tackle Derrick Brown said. "We let the quarterback run for a bunch of yards. That was the highest rushing total we gave up all year. On defense, look at their rushing statistics and stuff like that — that's a lot of yards to give up in a game. That really was an embarrassment."

Now, the Tigers have emerged as the league's top rushing team and a potential contender in a Western Division that also includes No. 4 LSU and No. 2 Alabama.

Bulldogs coach Joe Moorhead said he is "just as nervous going into this one as I was last year."

"We were fortunate to be able to do some things to keep them off balanced with maybe a little more misdirection than we have normally done," Moorhead said. "You are not just going to line up and run the ball downhill at these guys. It doesn't work that way. We are going to have to find creative ways to create space and angles."

Some other things to know about the Mississippi State-Auburn game:

It's unclear who will start at quarterback for the Bulldogs. Starter Tommy Stevens missed the Kentucky game while nursing a shoulder injury on his throwing arm, but was throwing in practice early this week, Moorhead said. Garrett Shrader was named the SEC freshman of the week after passing for 180 yards and rushing for another 125 in his starting debut.

Mississippi State and Ohio State are the only Power 5 teams to rush for 200-plus yards four times already.

Hill has already run 91 times for 551 yards and five touchdowns. He's facing a stout run defense led by Brown & Co. on the front line. The Tigers have held three of their first four opponents below 100 rushing yards.

Auburn can expect most teams to try to apply some pressure to freshman quarterback Bo Nix, and Malzahn describes the Bulldogs as "a very aggressive team." Mississippi State safety Brian Cole Jr. leads the SEC with 5.5 tackles for loss and the team with a pair of sacks.

The Bulldogs have forced a league-best 11 turnovers and trail only Alabama in turnover margin. Auburn hasn't been so good in that regard, tying for 12th with Texas A&M. The Tigers have only forced three turnovers, though Nix hasn't thrown an interception since getting picked off twice in the opener against Oregon.