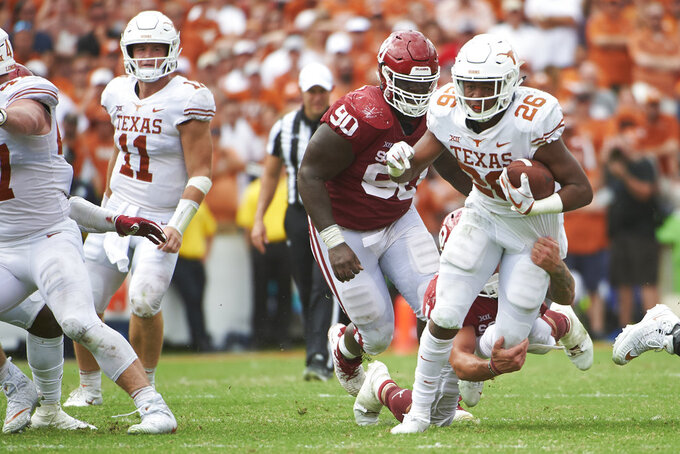 Texas running back Keaontay Ingram (26) breaks free against Oklahoma during the second half of an NCAA college football game at the Cotton Bowl, Saturday, Oct. 6, 2018, in Dallas. (AP Photo/Cooper Neill)

NORMAN, Okla. (AP) — Oklahoma fired defensive coordinator Mike Stoops on Monday after the Sooners struggled to stop Texas during their first loss of the season.

Ruffin McNeill, the assistant head coach and defensive tackles coach, will be the defensive coordinator for the rest of the season.

"At the end of the day, I felt like we needed a new voice," coach Lincoln Riley said Monday. "We needed just a little bit of a spark. I thought that making the change was right for that reason, and also because I felt good about the guys we have in this room and a plan for the rest of this season. This team's got a lot in front of them. This team could make a run here. I think we all feel that."

Riley's confidence in McNeill played a role in the decision to fire Stoops, the brother of former Sooners coach Bob Stoops. Riley was McNeill's offensive coordinator at East Carolina, and he brought McNeill to Oklahoma as assistant head coach before the 2017 season.

"All I can say is thank you @OU_CoachMike you gave me a shot when nobody else would and for that I am forever grateful no matter what people say they never know you for the great person you really are and how much you care for your players...Thank You Coach," linebacker Kenneth Murray tweeted.

The Sooners have a week off before they play at TCU, which will give the Sooners time to adjust. Riley said the players are comfortable with McNeill, which should help in the transition.

"He does have a confidence about himself," Riley said. "He's got a way with the players. They'll be excited to play for him."

Bob Diaco will move from defensive specialist to coach the outside linebackers. He has been defensive coordinator at Cincinnati, Notre Dame and Nebraska and was the head coach at Connecticut from 2014 to 2016.

The Sooners have struggled defensively the last two seasons, finishing 80th in the country in 2016 and 82nd in 2017 in yards per play allowed. Oklahoma is 17-3 under Riley, and the Sooners have scored an average of 41 points in those games, including a 54-48 loss to Georgia in the College Football Playoff semifinal at the Rose Bowl last season.

In one of Oklahoma's worst outings under Stoops, the Sooners beat Texas Tech 66-59 in 2016, despite giving up 854 yards. That day, Tech quarterback Patrick Mahomes ripped the Sooners for an FBS record 819 yards of total offense, including 734 yards through the air, and frustration from the fans reached a boiling point.

After a promising start this season, the complaints returned when unranked Army controlled much of the action before Oklahoma pulled out a 28-21 overtime win at home last month. Army possessed the ball for nearly 45 minutes. At his availability the following week, when a larger-than-usual media contingent got a bit close, Stoops joked that the "vultures (were) circling."

Riley said the decision was his alone, and he didn't make it based on just the Texas game.

"I don't know that there was any one stat or one thing or any single thing that happened," Riley said. "It's not really that dramatic. I think just for me it was a gut feeling. Coming back after that (Texas) game and just thinking through it, I slept on it, and (after) conversations with Mike and other people I respect, I just felt like it was the right thing to do."