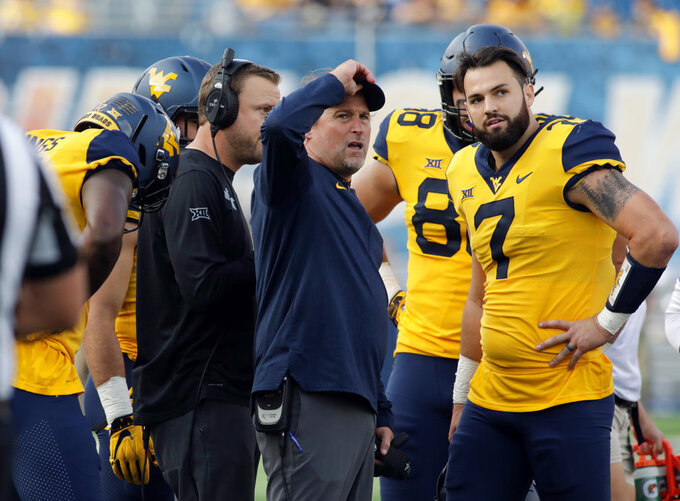 FILE - In this Sept. 22, 2018, file photo, West Virginia head coach Dana Holgorsen and quarterback Will Grier (7) talk during a timeout in the first half of an NCAA college football game against Kansas State in Morgantown, W.Va. The Mountaineers were thoroughly outplayed in a 30-14 loss at Iowa State last Saturday. Now, West Virginia (5-1, 3-1 Big 12) must use its final bye week to try to fix what went wrong. (AP Photo/Raymond Thompson, File)

Some things to know about Week 8 in the Big 12 Conference, when there are only two games on the schedule:

No. 9 Oklahoma (5-1, 2-1 Big 12) at TCU (3-3, 1-2). Both teams are coming off a loss going into a rematch of last year's Big 12 championship game. The Sooners are playing for the first time since firing defensive coordinator Mike Stoops after a 48-45 loss to Big 12-leading Texas on Oct. 6, when they overcame a three-touchdown deficit in the fourth quarter before losing on a field goal in the closing seconds. TCU has already matched its loss total from last season, when two of the three defeats were to Oklahoma.

Lincoln Riley vs. Gary Patterson, the head coaches focused and excelling on different sides of the ball. Riley is the offensive mind at Oklahoma, while Patterson is the defense-oriented coach for TCU. While the Horned Frogs lost 17-14 in their last game, they held Texas Tech 31 points below its season average and allowed only 353 total yards — 248 under what was then the national-best average of 591 a game. The Sooners are now leading the Big 12 with 48 points per game, and their 525 total yards a game are only 27 shy of where the Red Raiders are now.

Six of the league's 10 teams have open dates. ... There are no more open dates after this week, meaning there will be full Big 12 slates of five conference games each of the last five weeks of the regular season. ... Big 12 teams averaged only 19.8 points per game last week. Five of the eight teams that played scored 17 points or fewer. ... Texas and Notre Dame are the only teams in the country that are 3-0 this season against Top 25 teams. ... Texas and Iowa State join Florida and Notre Dame as the only teams with victories over Top 25 teams in consecutive weeks. The Cyclones got theirs in the last two games, winning at Oklahoma State before a home win over West Virginia.

Kansas, the only Big 12 team without a conference victory, is a nearly three-touchdown underdog going to Texas Tech. The Jayhawks have lost 18 of 19 games in the series, including the last 11. The last two matchups were decided by 46 and 36 points, respectively.

Texas Tech junior receiver Antoine Wesley is the Big 12 leader with 117 yards receiving per game. His 703 yards through six games is the fourth-highest total for a Texas Tech wideout since 2000. After only 12 catches for 146 yards in his first two seasons, Wesley has 41 receptions this season. He set a single-game Red Raiders record earlier this year with 261 yards on 13 catches and three TDs against Houston.