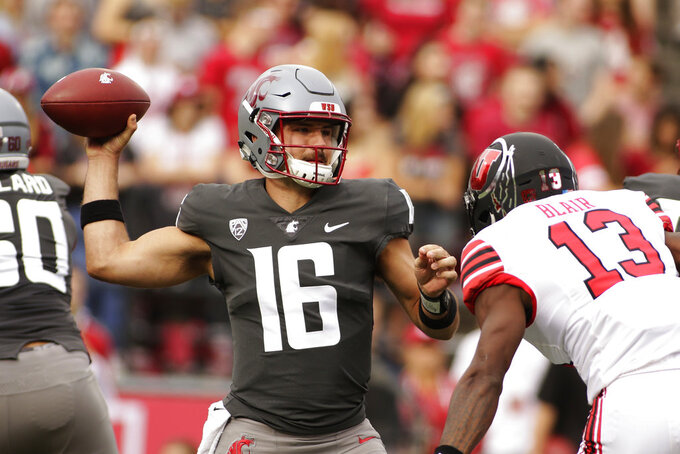 Washington State quarterback Gardner Minshew II (16) throws a pass while under pressure from Utah defensive back Marquise Blair (13) during the first half of an NCAA college football game in Pullman, Wash., Saturday, Sept. 29, 2018. (AP Photo/Young Kwak) 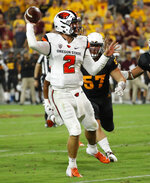 But the Beavers will still have to deal with Gardner Minshew.

The graduate transfer threw for 445 yards and three touchdowns in the 28-24 victory over the Utes, including an 89-yard touchdown to Easop Winston in the fourth quarter that essentially won it for the Cougs.

Which is good and bad news for the Beavers, whose rushing defense is ranked 127th among FBS teams (303.4 yards per game). But they're ranked 88th nationally for pass defense, allowing 240.2 yards a game.

Leach wasn't concerned about Washington State's one-dimensionality against the Utes. He said lots of players contributed and that's what he wants.

He scoffed at the idea that teams need a 50-50 attack.

"That's 50 percent stupid," Leach said. "There is nothing clever about that."

Coach Jonathan Smith fully expects the Cougars to run it more against the Beavers. Oregon State (1-4, 0-1) allowed Arizona State 396 rushing yards last weekend in a 52-24 loss. Eno Benjamin ran for a school-record 312 of those yards and was named the Pac-12 Offensive Player of the Week.

"They do have some backs that can do some things. And they throw the ball to the backs — so there's some weapons there," Smith said.

But in all likelihood it's not the running backs the Beavers will need to key in on: It's Minshew, who has had five straight games with at least 300 yards passing.

Minshew is the national leader among quarterbacks with averages of 398.4 yards passing and 37 completions per game. So far he's thrown for 14 TDs.

The Beavers pass-rush could use some help, too, Smith acknowledged.

"It's a work in progress. It's not where we want it," the coach said. "We've had some flashes of putting more pressure on."

Other things to know as Oregon State hosts Washington State:

PIERCE BACK?: Oregon State running back Artavis Pierce was listed as probable going into Saturday's game. That's good for the Beavers. Pierce broke out for a pair of long TD runs in the opener before an elbow injury in the second week. He'll rejoin freshman Jermar Jefferson, who leads the Pac-12 with an average of 145.4 rushing yards a game.

But the Beavers will likely be without senior quarterback Jake Luton, who is still recovering from a high ankle sprain.

FAMILIAR FOE: Leach is certainly not unfamiliar to Smith, who was an assistant to Chris Petersen at Washington before becoming head coach at Oregon State.

THAT 'STACHE: Leach thinks the attention paid to Minshew's mustache is a bit overblown.

"The poor guy came in with a mustache and all of a sudden the mustache took off," Leach said.

He suggested that Cougars mascot Butch might want to sport a mustache.