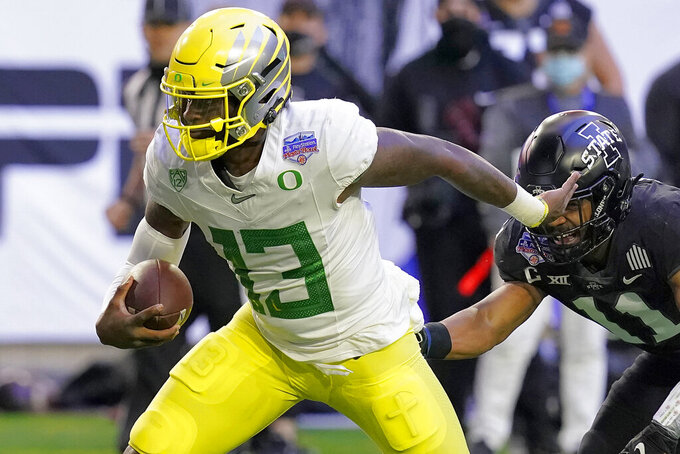 FILE - In this Jan. 2, 2021, file photo, Oregon quarterback Anthony Brown (13) runs for a touchdown as Iowa State defensive back Lawrence White IV (11) defends during the first half of the Fiesta Bowl NCAA college football game in Glendale, Ariz. Brown, a sixth-year senior and the Ducks' presumed starting quarterback, suggested he and the team are stronger after coming together following the delays and cancellations caused by the pandemic in 2020. (AP Photo/Ross D. Franklin, File)

The Ducks are finally going to feel that Autzen atmosphere again.

Eleventh-ranked Oregon will play in front of a crowd for the first time since November 2019 on Saturday when the team hosts Fresno State.

“It’s priceless," Oregon coach Mario Cristobal said about Autzen Stadium. “That’s the best way to describe it in every single aspect, from the enthusiasm it generates within our program and our players, the excitement, and just the flat-out juice that comes from the stadium.”

While the reopening of Autzen and the start of the college season is festive, the game is set against a backdrop of rising COVID-19 cases in Oregon.

Oregon and Oregon State were among the first schools to require proof of vaccination or a negative virus test to attend football games. But Gov. Kate Brown also imposed a mask mandate, which goes into effect Friday.

Fans will still be required to show negative tests or vaccine cards, however, meaning there could be delays getting into the stadium.

Oregon went 4-3 overall last season amid the pandemic. The Ducks defeated USC 31-28 in the Pac-12 championship game and went on to play in the Fiesta Bowl, but fell to Iowa State 34-17.

Fresno State has already had its chance to play in front of fans.

The Bulldogs got a 45-0 victory at home over Connecticut last week. Quarterback Jake Haener threw for 331 yards and three touchdowns in the victory over UConn, which hadn't played a game since 2019.

Oregon will take it to another level, said Fresno State coach Kalen DeBoer.

“We got our feet underneath of us, now we know what it feels like — that game speed. It’s going to be ramped up another level just because we’re facing a top-tier team in the country," DeBoer said. "And what they have on us now is they have a pretty good understanding of who our personnel are and kind of what our base stuff is coming out of the gate, but they had that probably before the season as well.”

Brown battled freshmen Ty Thompson, Robby Ashford, and Jay Butterfield in camp, but he was widely expected to be named the starter.

Brown transferred to Oregon last year from Boston College but sat behind Tyler Shough until he got playing time in the Pac-12 title game and the Fiesta Bowl. Shough transferred to Texas Tech in the offseason.

“It’s cool to finally get back out there and be able to start again, but still got work to do,” Brown said.

Running back Ronnie Rivers, who got an extra year of eligibility because of the coronavirus, returned to the Bulldogs and ran for a touchdown in the opener — setting the Fresno State record for career touchdowns scored with 45.

“At running back, they’re about as good as you’ll find, not only on the West Coast or in their conference, but around the country,” Cristobal said. “I know that Rivers has shattered just about every record at the university. They find different ways to get him the ball.”

Rivers is the son of former Bulldog Ron Rivers, who rushed for 3,473 yards, second-most in school history, from 1991-93.

Fresno State hasn't played a ranked opponent since 2018. The Bulldogs haven't defeated a team ranked as high as Oregon since 2001, when they beat No. 10 Oregon State.

“We need to prepare our best to play our best and that’s all we can control, and then the rest of it will take care of itself," DeBoer said. “But it’s gonna be something we embrace. It’s gonna be an exciting atmosphere, and our guys are in a good spot, I think, after this first week. That's what you play for, you want to be tested, and it’s gonna be a lot of fun.”

Oregon leads the series against Fresno State 7-2. The Bulldogs haven't downed the Ducks since 1982.