Pac-12 North up for grabs when Oregon hosts Oregon State 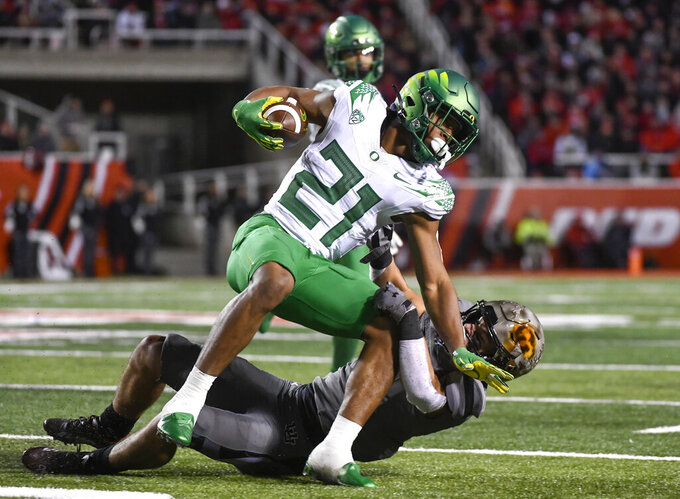 Oregon running back Byron Cardwell (21) is tackled by Utah safety Cole Bishop, below, during the second half of an NCAA college football game Saturday, Nov. 20, 2021, in Salt Lake City. (AP Photo/Alex Goodlett)

Things to watch in Week 13 of the Pac-12 Conference:

Oregon State (7-4, 5-3 Pac-12) at Oregon (9-2, 6-2): The Ducks will capture the North Division and a spot in next week's championship game against Utah with a win in their annual rivalry game against the Beavers on Saturday. But Oregon State won last year's game and has its own hopes for a division title with a win and a loss by Washington State. Oregon is looking to become the first team to reach three straight Pac-12 title games since it began in 2011.

Washington State (6-5, 5-3) at Washington (4-7, 3-5): The Cougars can claim the North with a win on Friday and an Oregon State victory, but they haven't won the Apple Cup since 2012 and have a six-game losing streak in Seattle. QB Jayden de Laura had a career-high four touchdown passes in last week's win at Arizona. The Huskies have won the last seven Apple Cup games by at least 10 points.

UCLA quarterback Dorian Thompson-Robinson is second in the conference in total offense, averaging 275.2 yards per game as the Bruins (7-4, 5-3) host California (4-6, 3-4) on Saturday. The Bruins are looking to get six conference wins for the first time since 2014.

Stanford (3-8, 2-7) is looking for its second win over a top 10 team this season when it hosts Notre Dame (10-1). The Cardinal are the only team playing 12 Power Five teams during the regular season and have been held to 14 points or less in five of their last six games since beating Oregon.