Ridder does everything for No. 3 Cincinnati in rout of SMU 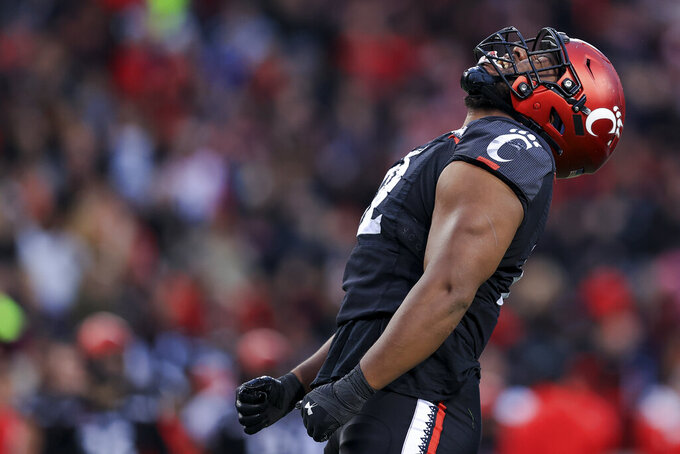 CINCINNATI (AP) — Desmond Ridder threw three touchdown passes, ran for another score and even caught a TD pass to help No. 3 Cincinnati roll past SMU 48-14 on Saturday.

Alec Pierce had a pair of TD catches for the Bearcats (11-0, 7-0 American Athletic). They extended the nation's second-longest home winning streak to 26 games and keep alive hopes of becoming the first non-Power 5 team to reach the College Football Playoff.

“We've been waiting on playing that complete game,” Bearcats coach Luke Fickell said. “We challenged them before the game and again at halftime. They stepped up and executed.”

SMU (8-3, 4-3) managed 199 yards of offense after averaging 498 through the first 10 games. Tanner Mordecai, the AAC offensive player of the week last week for the fourth time this season, had only 63 yards passing and was sacked three times.

“They lined up and whipped us pretty good,” SMU coach Sonny Dykes said. "When that happens it’s on everybody. We need to coach better. We’ve got to play better. But I give them a lot of credit. Cincinnati looked like a top three team, a playoff team. They certainly made a statement tonight.”

It was an emphatic start to the game for the Bearcats. After Cincinnati forced SMU to punt on its first possession, Ridder found Tyler Scott wide open for a 53-yard scoring pass on the first play from scrimmage.

“We had that play scripted the night before,” said Ridder, who passed for 274 yards. “I knew I was throwing to the post and I saw Tyler running wide open.”

Following a partially blocked punt by Wilson Huber, the Bearcats took over at the SMU 25 and Jerome Ford's 4-yard run made it 14-0 with 5:32 left in the first quarter.

“We had one chance earlier in the game, so we wanted to get after it,” Huber said. “I was able to get through the shields and get my hand on it.”

Ford had 20 carries for 82 yards and a touchdown after missing a game due to injury.

After a fumble ended a promising drive for the Mustangs, Ridder scored on a 40-yard keeper on fourth-and-1 to make it 20-0 in the second quarter.

Alec Pierce caught a 17-yard touchdown pass from Ridder and the Bearcats led 27-0 at halftime. Pierce had two TD catches.

Cincinnati's halftime lead could have been larger had it not been for a missed extra-point attempt and two missed field goal attempts, one which was blocked.

The Bearcats forced six three-and-outs in the first half.

“We came out and executed all-around,” said linebacker Curtis Brooks, who had two sacks. "Great game plan from the coaches. We wanted to go out and have some fun.”

The play had been in Cincinnati's playbook for the entirety of Ridder's career but until Saturday night, it hadn't been used. When the call was made, not even Fickell knew it was coming. “I'm not sure I would have went along with it,” he said. But it was executed perfectly on the Bearcats' first possession of the third quarter when Ford took a handoff from Ridder then flipped to Jordan Jones who then passed to Ridder in the end zone for a 5-yard touchdown. “We've had that play for four or five years now,” Ridder said. “I let the coaches know my hands are certified. I was glad they called it on senior night.”

SMU: The Mustangs were without injured receiver Danny Gray who has 803 receiving yards and nine TDs this season, and averaged only 3.5 yards per play. “They didn’t do anything we haven’t seen,” said Dykes. "They didn’t do anything sneaky. They had us backed up early. We had a punt blocked. That hasn’t happened to us in years.”

Cincinnati: Two straight losses dropped SMU from the Top 25 and took some luster off the game for the Bearcats, who needed a signature league win to put alongside beating Notre Dame. But some style points on Saturday couldn't hurt. “Coach Fick always tells us to keep blinders on,” Bearcats receiver Tre Tucker said. “I have friends and family, but honestly, we know what we're capable of.”

Cincinnati dropped one spot to No. 3 in the poll this week, but more importantly moved up to No. 5 in the College Football Playoff rankings to stay in the hunt.

Cincinnati: At East Carolina on Friday.