Saban wants Alabama's focus on what's ahead after big win 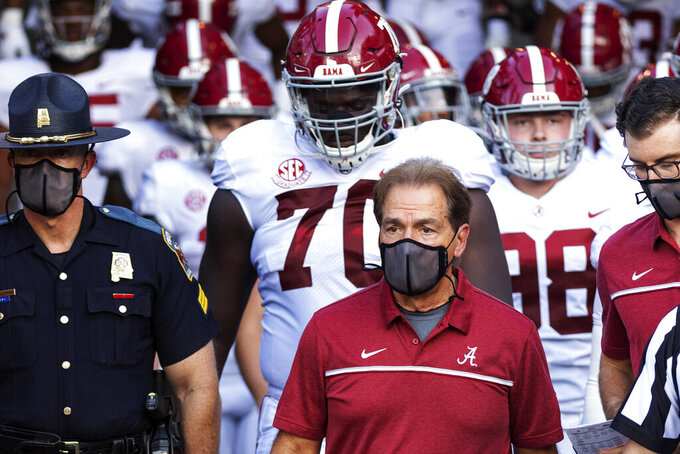 FILE - In this Sept. 26, 2020, file photo, Alabama coach Nick Saban leads his team to the field before an NCAA college football game against Missouri in Columbia, Mo. Saban and athletic director Greg Byrne have tested positive for COVID-19, four days before the Southeastern Conference's biggest regular-season showdown. The second-ranked Crimson Tide is set to face No. 3 Georgia on Saturday, and may be without their iconic 68-year-old coach. (AP Photo/L.G. Patterson, File)

Nick Saban's postgame dance during Alabama's celebration of a big win was short-lived, then it was back to business.

A video of the second-ranked Crimson Tide coach's dance moves after that 41-24 win over No. 4 Georgia made the Internet rounds. It only lasts a few seconds before a grinning Saban stops and proclaims, “Great win.”

Saban's attention quickly turned to the Tide's visit Saturday to rival Tennessee, but he wanted his team to savor the victory against Georgia.

“We’ve won games around here where we go into the locker room and everybody just kind of — this is just what everybody expects,” he said Monday. "And I hate that. I hate to see that. I think everybody should enjoy every win. They’re hard to come by.

“The expectation sometimes gets to be, well you’re Alabama and you’re supposed to beat this team and if you don’t beat them a certain way then that’s not good enough, and I don’t really think that’s fair to the players. These guys work hard.”

Now, Saban wants Alabama to focus on building on the win and not getting swept up in the hype.

The Tide (4-0) figures to be a heavy favorite the rest of the season with no ranked teams left on the schedule.

The pressing question now — beyond how are Saban's dance moves — is how Alabama will remain humble and focused enough to avoid a letdown.

“I don’t know how they’re gonna handle it,” Saban said. "Hypothetical questions, I don’t have a crystal ball. I hope they have enough maturity to handle it the way they need to, but we won’t know until we practice all week and until we see how they play in the game.”

After the 2018 season, Saban pointed to the top-ranked Tide's 29-0 win at No. 3 LSU as a turning point of sorts. Alabama kept winning but not necessarily maintaining that high level, all the way into the national championship game.

“We just learned we can’t take any weeks off," Alabama cornerback Patrick Surtain Jr. said. "We’ve got to prepare every week like it’s your last week.

"That sort of kicked us in the foot a little bit two years ago, but we learned from our mistakes and we’re ready to start something new this year.”

After the surprisingly close game against the Aggies, Saban called all the media hype “rat poison” for his players and team, detracting from their performance.

This team doesn't have quite the same hype or pressure. Clemson is ranked No. 1, after all.

But after that emphatic comeback win, when Alabama outscored the Bulldogs 21-0 in the second half, Saban wants to guard against any overconfidence. The Tide is a 20-point favorite over the Volunteers.

“We have a 24-hour rule, we enjoy the win for 24 hours and we move on to the next team,” Alabama tailback Najee Harris said. “We’re playing a good team, so hopefully they move past it and their mind is on next week, this upcoming game.”

That's where Saban wants the focus.