SEC has top 2 teams, but depth may be league's real strength 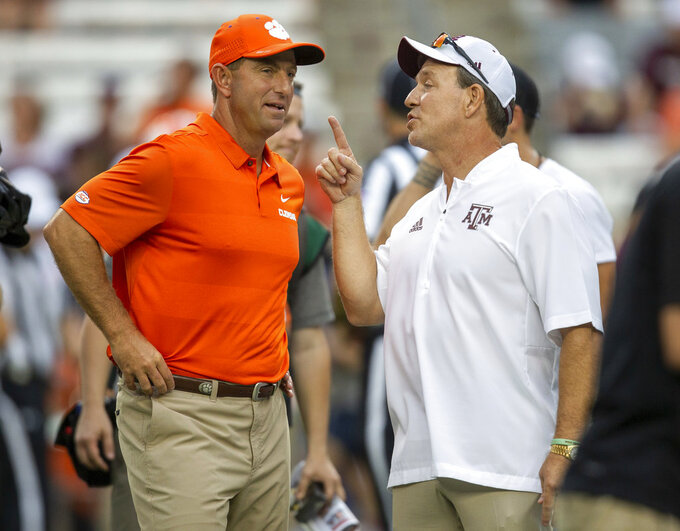 FILE - In this Sept. 8, 2018, file photo, Clemson head coach Dabo Swinney, left, and Texas A&M head coach Jimbo Fisher talk before the start of an NCAA college football game, in College Station, Texas. An example of the SEC's depth is No. 22 Texas A&M, which plays at No. 1 Alabama this week. The Aggies' only loss was to No. 3 Clemson, 28-26. (AP Photo/Sam Craft, File)

There's much more to the Southeastern Conference's 2018 depth chart than the league's impressive two-deep hold on the top of the poll.

Sure, Alabama and Georgia are looking strong as the nation's top-ranked teams. It's far too early to assume the SEC rivals who met in last year's national championship game will play again for this year's SEC title, however. The path to Atlanta is more treacherous than suggested by the skeptics who predicted the league would be top-heavy and weaker in 2018.

The SEC has shown impressive depth in the first three weeks while staking early claim to bragging rights as the nation's best conference. The league has the nation's best record (7-3) against Power 5 teams and has even looked strong in its rare losses, including Vanderbilt's narrow defeat at No. 8 Notre Dame last week.

Florida coach Dan Mullen said the real difference in the SEC is the quality of competition from its unranked teams.

Mullen's Gators were No. 25 before losing at home to Kentucky on Sept. 8. The Wildcats could emerge as a top threat to Georgia in the SEC East.

The SEC has four top 10 teams, and six are ranked in the Top 25. The depth which impresses Mullen is reflected in the 3-0 starts by three unranked teams — Kentucky, Mississippi State and Missouri, which plays No. 2 Georgia on Saturday.

Mullen said the SEC's real strength shows in comparisons with other leagues that start at the bottom.

"All of a sudden it's like, 'Holy cow,'" Mullen said. "When you get to the top, that's where we might get even. But the other direction the SEC is a tough, tough league. It's that depth within the league that makes it a challenge."

An early exception to the SEC's claim of top-to-bottom depth is Arkansas, which fell to 1-2 with losses to Colorado State and North Texas. The Razorbacks play their conference opener at Auburn on Saturday night.

That said, proof of the SEC's strength has come in No. 9 Auburn's win over No. 10 Washington to open the season and No. 6 Louisiana State's wins over No. 21 Miami and Auburn .

"The SEC is a different beast," said Tennessee safety Micah Abernathy. "We know that, and we're going to prepare for it."

The depth is impressive. Still, it's easy to understand why the focus is on the favorites to play for the SEC title.

LSU is already building an impressive resume. Even so, coach Ed Orgeron isn't ready to say his team merits mention with Alabama and Georgia.

"I don't know yet," Orgeron said. "We have a ways to go. Those guys, they're some good football teams. Obviously, we can't think about them yet, but I do watch them. And I think they're excellent. They have a lot of athletes. They're well-coached and we have a ways to go to get there."

Orgeron can make comparisons later in the season. LSU plays home games against Georgia on Oct. 13 and Alabama on Nov. 3.

After coming so close to an upset in the 22-17 loss at Notre Dame, Vanderbilt coach Derek Mason says the teams long considered also-rans in the conference are moving up.