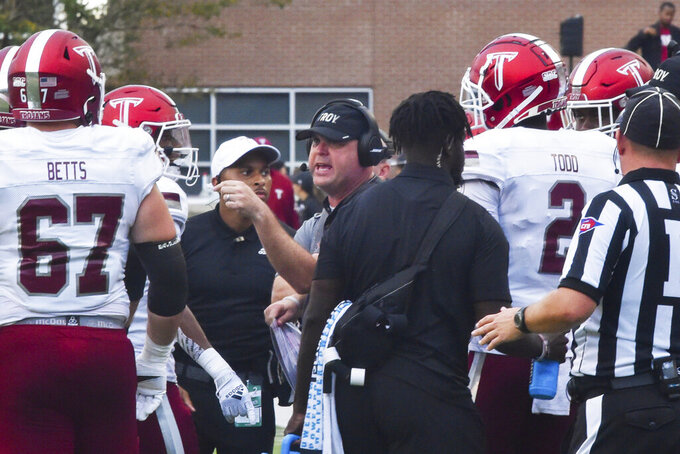 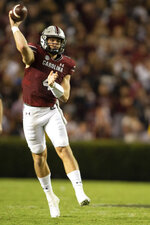 First-year South Carolina coach Shane Beamer has a message for worried Gamecock fans: “The sky is not falling.”

Beamer hopes his team has an improved showing this week against Troy of the Sun Belt Conference on Saturday can further help talk supporters off the ledge.

South Carolina (2-2) is coming off a pair of disappointing defeats to start SEC play in a 40-13 loss at No. 2 Georgia and a 16-10 loss to Kentucky that ran the Gamecocks conference losing streak to eight in a row.

But Beamer's not allowing gloom-and-doom to set in among his players or his fanbase so early in his tenure.

“Last week's behind us, we've learned from it, players and coaches, and we've got to get better every week," Beamer said.

South Carolina has struggled to score points this season, sitting 13th out of 14 in the SEC. It's relying on defense to keep things close. The group collected three turnovers and two fumbles in the second half as they tried to claw back on Kentucky. But the Gamecocks failed to score either time.

“I'm hurting and disappointed as anybody that we're not 4-0 right now,” Beamer said.

Troy (2-2) is coming off a poor start to conference play, too, with a 29-16 loss to Louisiana Monroe in the Sun Belt opener.

Trojans coach Chip Lindsey thought his team had a strong week of practice leading up to the ULM game and was deflated with the outcome.

“Thought our guys played hard. Did not play very clean at all,” Lindsey said.

Troy came out on top in total yards and time of possesion, yet was hit by too many mistakes, Lindsey said, including an interception that was run back 96 yards for a touchdown.

“If we do that, I think we'll have an opportunity to go win the game which would be a great shot in the arm for us,” he said.

Some things to watch for when Troy goes to South Carolina:

Luke Doty is slowly getting back to 100 percent after injuring his foot in practice this past August. Doty made his first start of the season in the Kentucky loss. He completed 17 of 25 passes for 158 yards with a touchdown. Beamer said Doty is healthy enough to play, but is still shaking off the cobwebs from missing the first two games of the season.

Troy has a history of defeating Power Five teams they're not supposed to. The Trojans count victories over LSU, Missouri, Mississippi State, Nebraska and Oklahoma State. They won at LSU in 2017 24-21 and took home close to $1 million in the financial guarantee for the game.

The Gamecocks are on top of the SEC in getting turnovers this season. They've got seven interceptions and three recovered fumbles, their total one more than Georgia's seven picks and two fumble recoveries. Beamer said he and his staff have emphasized winning the turnover margin this season and Gamecock defenders have been in the right spots for the takeaways.

The Trojans feature a fierce defense led by linebackers Carlton Martial and Javon Solomon. Martial is the active career tackling leader in FBS with 8.9 stops a game. Solomon, a freshman, had nine tackles, including 3 1-2 sacks in the win over Southern Miss two games ago.

South Carolina kicker Parker White moved closer to the school's all-time scoring mark with a career-long 54-yard field goal against Kentucky. White has made all six of his field goals and all seven PATs. He's 45 points shy of Elliott Fry's mark of 359 points in a Gamecock career.