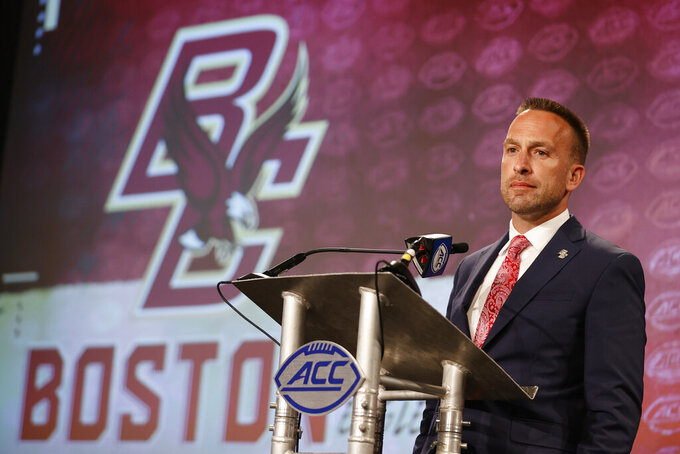 It’s also a league struggling to keep up with peers in the Big Ten and Southeastern conferences.

League schools have talked for years about finding ways to close that growing gap. But as the Big Ten and SEC expand to add marquee names, the ACC's concern becomes more pressing and even stirs uncertainty about its long-range future in terms of whether schools might eventually try to chase money elsewhere.

For now, that means trying to squeeze more money out of a long-running TV deal, kicking around ideas and even holding out hope that Notre Dame might one day shed football independence to join the ACC and boost the bottom line.

At ACC Kickoff preseason media days on Wednesday, Phillips said “all options are on the table."

"It's significant ... so it deserves your attention," Phillips said in an interview with The Associated Press. "It deserves creativity. It deserves all that you have to try to figure a way for a path forward that really makes sense and that brings additional value to the conference.”

The league's deal with ESPN, which included the long-sought 2019 launch of its own network, runs through 2036. It also has an extension of a grant-of-rights provision that gives the league control of media rights for any school that attempts to leave for the duration of the deal, which is a move to deter defections in future realignment.

That appears to have the ACC on stable footing for the immediate future. But for how long? Figuring out a way to better grow the financial picture could determine that.

Phillips described the league and ESPN as partners with a mutual interest in making the ACC Network as profitable as possible to support the league.

“How can they have a partnership and an asset and not want it to really be thriving over the next 14 years?” Phillips told the AP. “That doesn’t make any sense. So they are motivated. And when you talk about (how) we’re considering multiple options, it’s just that.

The ACC’s most recent tax filing listed a record $578.3 million in total revenue while distributing an average of $36.1 million per school for the 2020-21 season, which included Notre Dame as a one-year full football member for scheduling purposes during the COVID-19 pandemic.

And yet, years of healthy growth are heavily outpaced by numbers coming out of the SEC and the Big Ten. For that same 2020-21 season, the SEC reported nearly $833.4 million in revenue and an average distribution of $54.6 million, while the Big Ten checked in at $679.8 million and an average $47.9 million payout.

And with those leagues announcing upcoming name-brand additions — Texas and Oklahoma to the SEC, USC and UCLA to the Big Ten – the revenue gap could grow more aggressively.

“It’s a concern, yeah,” North Carolina State coach Dave Doeren said. “If one school is getting $30 million more than another school, they can do more things with the money. It’s been that way for a while, though.

“If you look at what’s happened, we’ve still had a team in the playoffs (seven of eight) years. So we’ve overcome it. But you wouldn’t like to overcome it if you didn’t have to.”

Several others shrugged off the topic.

Louisville offensive lineman Caleb Chandler, a sixth-year senior, wasn’t focused on it because he’ll be gone next year and “won’t affect me in any way.” N.C. State quarterback Devin Leary said he wasn’t worried about it, either.

“You want to talk about revenue and gaps, like that’s just – I coach football,” Boston College coach Jeff Hafley said. “That’s beyond me.”

And then there was Clemson coach Dabo Swinney, whose program has reached six College Football Playoffs with two national championships.

“I don’t have any concern because other people worry about all of that stuff and deal with it and figure out whatever,” Swinney said. “I mean, Lord have mercy, in 2036 I don’t know where I’ll be. That’s a long time and they will figure all of that stuff out.”

Besides, there’s little the ACC teams can do other than win games and become more appealing brands. Beyond that, it's up to league leadership to figure out the next moves.

“I think you have to be measured and it has to be ultimately good for the long-term health of the conference,” Phillips told the AP. “To make a move just to make a move is not the right thing for the ACC. It just isn’t.”