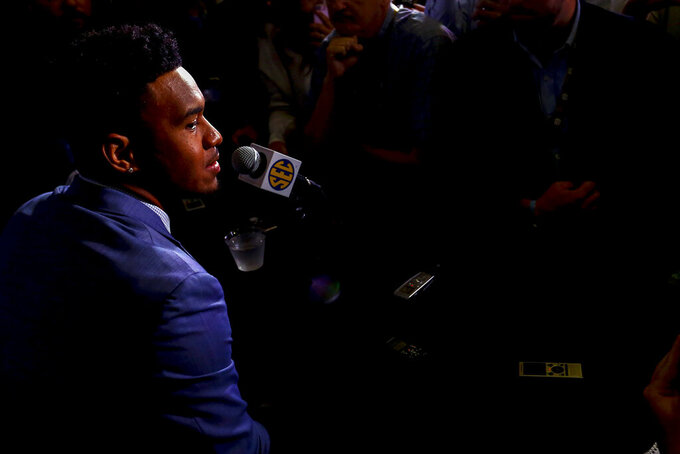 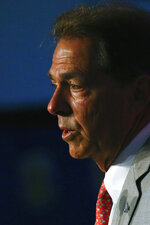 HOOVER, Ala. (AP) — It's easier for Alabama to be humble now.

The Crimson Tide can thank Clemson for that, at least. There's nothing like a 44-16 drubbing in the national championship game to strip away any feelings of invincibility and self-satisfaction that come from scarcely getting challenged during the regular season on the way to another Southeastern Conference title.

"I know it sounds bad, but I'm glad I had that opportunity to feel a loss like that, because what can you learn from winning?" Tide quarterback and Heisman Trophy runner-up Tua Tagovailoa said Wednesday at Southeastern Conference media days. "You can't learn as much. But when you lose, you start appreciating things a lot more. Many lessons have been learned from that loss."

It's a silver lining of sorts from a painful performance that rattled Nick Saban's dynasty and made it clear Clemson is a challenger for the label of college football's dominant program.

The defense was abused by Trevor Lawrence and the Tigers and allowed 300-plus yards passing in each of its last three games. Tagovailoa — who spent most fourth quarters during the season as a spectator — was intercepted twice, including a pick-six on Alabama's opening series.

It didn't get much better from that point.

But the end result doesn't change the expectations for a team seeking its sixth national title under Saban and a fifth SEC title in six years.

Led by Tagovailoa, wide receiver Jerry Jeudy and linebacker Dylan Moses, Alabama approaches this season as one of the national favorites as usual.

Plus, it's easier to soul-search and improve after such a loss than while celebrating yet another triumph.

"Whether or not people were worried about personal outcomes more than team outcomes, it's always hard to judge that," Saban said. "But it seems like we had a lot of distractions at the end of the year. So hopefully we learned from those scenarios, and it will help us do the things that we need to do to be able to play to our full potential throughout this season."

The challenge will be maintaining focus until the end. Alabama might have coasted at times down the stretch after a 29-0 rout of LSU that secured a spot in the SEC championship game with three games left. It didn't really matter until the competition became elite, starting with Georgia, which jumped ahead by two touchdowns.

"We'd only play for two or three quarters, and then we'd let off the gas."

Alabama survived against Georgia and again in the national semifinals against Oklahoma . Then the engine sputtered from the get-go versus Clemson, which could match Alabama's wealth of talent on both sides of the ball.

Moses said things like media attention, accolades and worrying about the NFL draft can be distractions.

"I do wish I could have it back," the linebacker said. "I really wish I could have the whole month of December back in a sense, so we could look at Oklahoma and Clemson at the same time and try to prepare ourselves for it. Obviously, during the game we weren't prepared for it and Clemson got the best of us that day. Kudos to them. From that point on, we learned from our mistakes and we're trying to get better."