Alabama's McKinney a standout safety who can draw, too 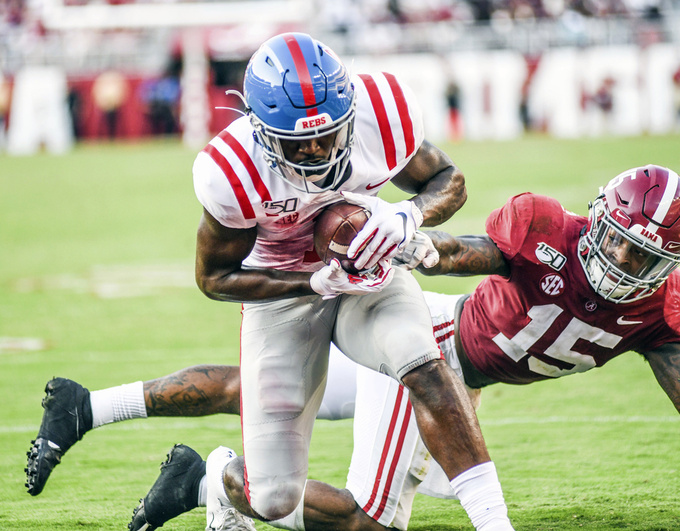 Mississippi wide receiver Jonathan Mingo, left, gets away from Alabama defensive back Xavier McKinney (15) for a touchdown catch during an NCAA college football game in Tuscaloosa, Ala., Saturday, Sept. 28, 2019. (Bruce Newman/The Oxford Eagle via AP)

TUSCALOOSA, Ala. (AP) — Xavier McKinney is Alabama's leading tackler and one of the team's top defenders. He can draw, too.

The top-ranked Crimson Tide's junior safety has emerged as one of the stars of a defense that has been hit hard by injuries at other positions. He's also Nick Saban's latest standout at the position.

McKinney ranks second in the Southeastern Conference, averaging 8.2 tackles per game heading into Saturday's game at No. 24 Texas A&M. He's also an avid amateur artist, carrying around journals and loose paper for his drawings.

His more conspicuous artwork is the motivational messages he writes on his practice pants every Tuesday during the season.

McKinney typically writes "Run to the ball," along with "44-16". That's the final score from the Tide's national championship game loss to Clemson, and the reminder of how he felt after that game typically is enough to help him push through tough workouts.

"I'm a self-motivated type of guy," McKinney said. "I don't need a whole bunch of pep talks from anybody else. I kind of have pep talks with myself."

They seem to be working.

Like with his self-motivation, he mostly keeps the drawings to himself. None hang on his wall but he draws things like his tattoos — among others, he has "Humble" on his left biceps and "Hungry" on his right — or whatever strikes his fancy.

He uses that same blunt self-evaluation on his play, too. McKinney would get a little mad at himself watching film from last season, particularly early when he made "a lot of rookie mistakes."

He was still the team's third-leading tackler and defensive MVP of the Orange Bowl win over Oklahoma in the playoff semifinals.

They were all first-round or, in Collins' case, early second-round draft picks. Texas A&M coach Jimbo Fisher has seen enough of McKinney on film or from last season to predict that No. "15 will be a high drafted safety."

McKinney is coming off a career day against Mississippi, when he had 13 tackles. He has 41 stops, an interception, a forced fumble and two quarterback hurries. Saban said he has "made a tremendous amount of improvement."

"X is a really hard worker," the coach said. "He sets a great example. He's always full speed ahead in how he practices and how he tries to do things. He's very focused, whether it's meetings, walk-throughs, whatever it is.

"And I would say that him and (linebacker) Anfernee Jennings have been our two most productive players on defense so far this year."

McKinney is one of the leaders of a defense that has largely gotten attention for key injuries and having started five freshmen. Otherwise, much of the attention has been devoted to quarterback Tua Tagovailoa and an offense that is averaging nearly 52 points a game.

In McKinney's mind, he's used to being under the radar, though he was a four-star recruit also pursued by the likes of Clemson and Georgia out of Roswell, Georgia.

"Ever since I really started playing football, I feel like I've always been overlooked," McKinney said. "Sometimes I feel like I may not get the recognition I deserve. But it is what it is. I can't really control that. I can only control what I control.