Allen agrees to new deal to stay with Hoosiers through 2027 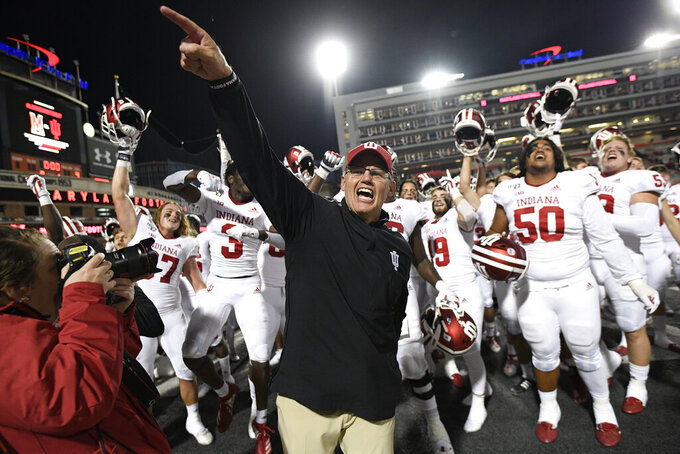 FILE - Indiana head coach Tom Allen, center, celebrates with his team after an NCAA college football game against Maryland in College Park, Md., in this Saturday, Oct. 19, 2019, file photo. Indiana coach Tom Allen has agreed to a restructured contract that will keep him with the Hoosiers through the 2027 season for $4.9 million in annual compensation.(AP Photo/Nick Wass, File)

BLOOMINGTON, Ind. (AP) — Indiana coach Tom Allen has agreed to a restructured contract that will keep him with the Hoosiers through the 2027 season for $4.9 million in annual compensation.

Indiana went 6-1 in 2020, earned a big to the Outback Bowl and finished No. 12, its highest appearance in the final rankings since finishing fourth in 1967. In 2019, the Hoosiers were 8-5 and played in the the Gator Bowl.

In December 2019, Allen signed an extension that was to pay him an average of $3.9 million over the next seven seasons. A provision in that deal also added an extra season to the contract each year Indiana earned bowl a bid. It has now qualified for two straight after falling one win short in each of Allen’s first two seasons in Bloomington.

“I would like to thank (athletic director) Scott Dolson, President (Michael) McRobbie and the board of trustees for their support and investment into our football program and our staff,” Allen said. “I’m excited about what we are building here and how we are building it. Having said that, we have unfinished business that we will continue to chase after every single day."

Last season, Indiana cracked the top 10 for the first time in 51 years and spent six weeks there, climbing as high as No. 7. In 2019, the Hoosiers posted their first winning season in conference play in 26 seasons and ended nation's longest Top 25 drought by a power-conference school.

“Tom Allen has proven himself to be not only the right person for our student-athletes and our program, but one of the best football coaches in the country,” Dolson said. “The enthusiasm and outlook for our program is at an all-time high, and the future of Indiana Football is in great hands."