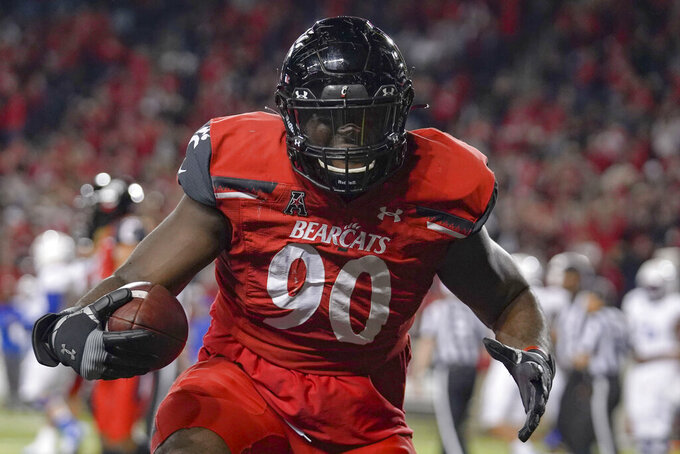 Cincinnati defensive lineman Jabari Taylor (90) celebrates after securing a fumble in the end zone during the second half of an NCAA college football game against Tulsa Saturday, Nov. 6, 2021, in Cincinnati. (AP Photo/Jeff Dean)

When the first College Football Playoff rankings come out, it is tempting to play What if?

What if this team wins out? What if that team remains unbeaten? What would the CFP field look like then?

It's a fun game, but usually the teams that most surprisingly reach November in playoff contention don't stay that way.

If you spent any time this week wondering: What if No. 5 Michigan State (CFP No. 3) or No. 10 Wake Forest (CFP No. 9) finished undefeated, well, that's not a thing anymore. Two of the most surprising teams of the season lost Saturday.

A week after the Spartans surged up the rankings with a dramatic victory against Michigan, they became the latest AP top-five team taken down by the Big Ten's Giant Killers.

The Spoilermakers struck again. Purdue now has 17 victories against top-five teams as an unranked team, six more than the next closest program. Just three weeks ago, star receiver David Bell and the Boilermakers handed Iowa it's first loss of the season. Bell was the catalyst against the Spartans, too.

Bell had 22 catches for 457 yards in the two huge upsets.

Purdue is the first team since Illinois in 2007 to win two games against top-five teams as an unranked team.

"We’ve had some adversity along the way, but that’s football and that’s what trains you to be great,” coach Jeff Brohm said. “It’s just a truly a great win for our program.”

One loss won't eliminate the Spartans, not as long as they still have a chance to win the Big Ten and a game against Ohio State in a couple weeks.

But Saturday was a reminder that Michigan State is probably closer to being a developing program on the upswing than a team ready to make the playoff in year two under coach Mel Tucker.

Michigan State is the fourth top-five team this season to lose to an unranked team, joining Alabama (No. 1 against Texas A&M), Iowa (No. 2 against Purdue) and Oregon (No. 4 against Stanford).

For Wake Forest, one loss might be enough to squash those CFP dreams.

The Demon Deacons' defense, as generous as their offense is dangerous, finally caught up to coach Dave Clawson's crew at North Carolina.

In a nonconference game between in-state Atlantic Coast Conference rivals that don't play nearly enough, North Carolina used a 24-0 run in the fourth quarter to beat the Deacs.

“It just felt like a rerun of last year’s game,” Clawson said.

The last two seasons, North Carolina and Wake have combined 225 points in a pair of one-possession games won by the Heels.

Wake is still in first in the ACC Atlantic, but that doesn't carry much weight these days. The Deacs could still finish as a one-loss conference champion, but with North Carolina State and Clemson coming up the next two weeks the division race is far from settled.

While fans and the selection committee demand style points from No. 2 Cincinnati (CFP No. 6) —- didn't get them this week —- all over college football it is survive and advance.

To be clear, it would be a lot easier to back the Bearcats' CFP push if they didn't need two goal-line stands in the final few minutes to put away Tulsa (3-6).

“It’s about winning against a team that is a much better football team than their record shows,” Cincinnati coach Luke Fickell said.

But it's not as if Cincinnati was the only highly ranked team from Ohio to gut out a victory against a three-win team Saturday.

“It’s great to get wins on the road. It’s not easy to do,” Ohio State coach Ryan Day said.

No. 7 Oregon came away with a workmanlike victory against rival Washington (4-5), proving Huskies coach Jimmy Lake's ill-advised point that the Huskies are indeed not recruiting against the Ducks.

Even No. 3 Alabama (CFP No. 2) looked out of sorts Saturday, running for 6 yards against an LSU (4-5) team that is playing out the string with a lame duck coach.

There are now only four unbeaten teams in major college football: No.1 Georgia, which continues to be in a class by itself, Cincinnati, No. 4 Oklahoma (CFP No. 8) and No. 16 UTSA.

AROUND THE COUNTRY: All the tension around Florida and Dan Mullen seemed as if it was leading to the Gators finishing strong against the weak part of their schedule and the coach making a bunch of staff changes in the offseason. After South Carolina pounded the Gators as a three-touchdown underdog, the idea of Florida firing Mullen feels very possible. It should be noted, Mullen said Florida was dealing with a flu outbreak ... Iowa State has won three straight against Texas under coach Matt Campbell. The Cyclones were 2-14 against the Longhorns before Campbell. ... Huge day for Big Ten receivers: joining Bell in topping 200 yards was Ohio State's Jaxson Smith-Njigba had 15 catches for 240 yards and Penn State's Jahan Dotson had 11 for 242 and all three of the Nittany Lions' offensive touchdowns against Maryland. ... Coordinator of the day: Texas A&M's Mike Elko. Not only did the 1 3th-ranked Aggies smother No. 12 Auburn, but A&M also got a commitment from the top defensive tackle in the class of 2022 on Saturday ... After Mississippi State went 0 for 3 on field goal attempts in a loss to Arkansas, Bulldogs coach Mike Leach said he would be holding an open tryout for kickers. Leach has always been quick to throw players under the bus. His frankness can be funny when his teams are winning. Will be interesting to see how that plays in Starkville if he is stuck in the back half of the SEC West for a few years. ... TCU's first game in more than two decades without Gary Patterson as coach was the Frogs' first victory this season against a ranked team. No. 14 Baylor absorbed its second loss and essentially removed itself from the CFP dark horse list. ... Arizona snapped its 20-game losing streak, the nation's longest, by beating Cal 10-3 in a game the Bears played without 24 players and five coaches because of COVID-19 protocols. The Cal coaches have said the team is almost 100% vaccinated and it appears that strict protocols enforced by local health officials led to the Bears missing seven starters, including quarterback Chase Garbers ... Then UNLV broke the second-longest losing streak in the country by beating New Mexico for Rebels coach Marcus Arroyo's first victory after 14 losses. ... Miami has won three straight, all high-scoring close games behind emerging stars Tyler Van Dyke and Jaylan Knighton, and heads into its rivalry game against Florida State very much alive in the ACC Coastal race, ... The rest of the American Athletic Conference continues to do Cincinnati few favors. No. 23 SMU lost its second straight game at Memphis and will certainly fall from the rankings ... Utah humiliated Stanford on Friday night, running for 441 yards in a game that was over well before halftime. Cardinal coach David Shaw had five double-digit win seasons and three Rose Bowl appearances in his first six season, but the programs has been what now looks like a freefall for the last five years and it's hard not to wonder if both Shaw and Stanford could use a change?