Arizona State and Utah meet in matchup of Pac-12 unbeatens 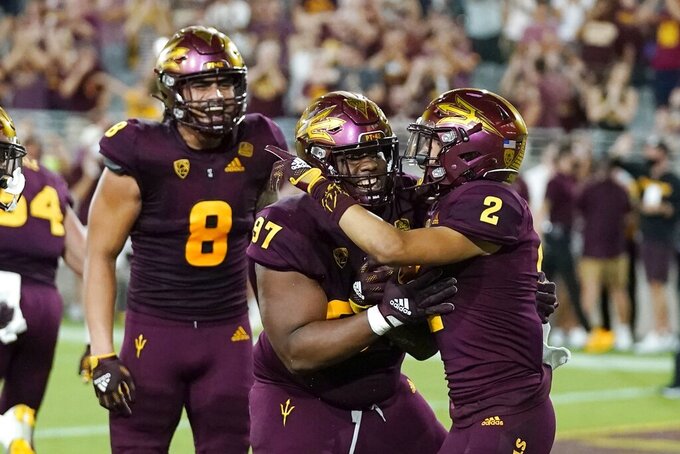 No. 18 Arizona State (5-1, 3-0 Pac-12) visits Utah (3-2, 2-0) in a matchup between the Pac-12's last two unbeaten teams in conference play. While it's still relatively early, the game could have implications for the Pac-12 South down the road. The Sun Devils are coming off a 28-10 victory at home over Stanford, which moved them up four spots in the AP Top 25. Utah was coming off an emotional 42-26 road victory over USC, the Utes' first game after the tragic death of teammate Aaron Lowe. It was Utah's first win over the Trojans in Los Angeles since 1916.

UCLA (4-2, 2-1) visits Washington (2-3, 1-1) for the first meeting between the teams since 2018. The Bruins' last victory in the series came in 2014. UCLA has won two straight on the road, including last weekend's 34-16 victory at Arizona. Washington is coming off a bye week after a tough 27-24 loss at Oregon State. These two teams are closely matched, with the point spread a mere 1 1/2 points in favor of Washington, according to FanDuel Sportsbook.

Oregon State and USC have bye weeks. The Trojans face Notre Dame on Oct. 23 on network television. ... Oregon State's B.J. Baylor leads the Pac-12 with 113 yards rushing per game. He's ranked No. 10 nationally. ... Colorado has lost four straight after a season-opening victory over Northern Colorado. The Buffaloes host winless Arizona on Saturday. ... Ninth-ranked Oregon hosts Cal on Friday night. The Ducks (4-1, 1-1) have been ranked in the top 10 for five straight weeks. The Golden Bears (1-4, 0-2) haven't defeated a top-10 team on the road since 1969.

Utah quarterback Cameron Rising threw for a career-high 306 yards and three touchdowns against the Trojans last weekend, while also rushing for 27 yards and another score. He was named the Pac-12 Player of the Week. Rising supplanted Baylor transfer Charlie Brewer as starter, and Brewer left the Utes after just three games.

Washington State (3-3, 2-2) can build on last weekend's victory over Oregon State this Saturday against narrow favorite Stanford (3-3, 2-2) in Pullman. It could be one of the final games for Cougars coach Nick Rolovich, who has not been vaccinated for COVID-19. Rolovich has applied for an exemption to the rule that state employees be vaccinated, but his decision has arguably been a black eye for the university.