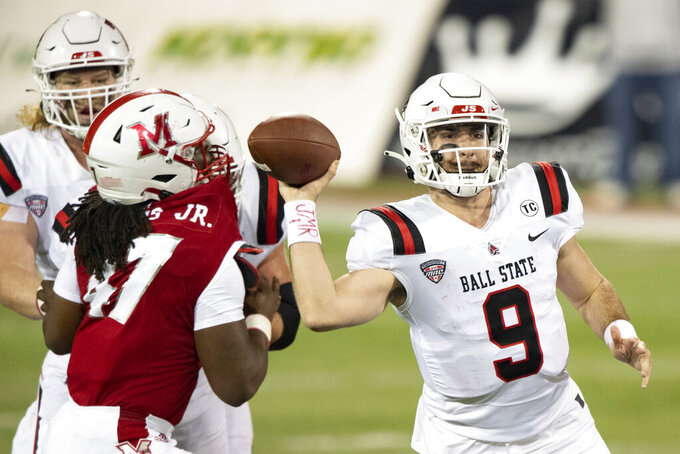 FILE - In this Wednesday, Nov. 4, 2020 file photo, Ball State Cardinals quarterback Drew Plitt (9) makes a pass during an NCAA football game against the Miami (Oh) Redhawks in Oxford, Ohio. Quarterback Drew Plitt returns for a sixth season. Will Jones and Tye Evans, who split carries during the second half of last season, also are back. Justin Hall and Yo'Heinz Tyler are expected to again form one of the league's top receiving tandems and all five offensive line starters remain in place.(AP Photo/Emilee Chinn, File)

When Ball State was picked to repeat as Mid-American Conference champion, coach Mike Neu shrugged off the prediction in his typically low-key manner.

He knew the history.

The last six league champs came from six different campuses. Only three teams have earned back-to-back crowns since the first championship game in 1997. And no MAC school has won consecutive titles since 2011-12.

So while he's confident Ball State can defy the odds, he's more focused on making the long journey back.

“A year ago we were a team that, we were scary but we couldn’t finish," he said. “All we’ve really proven now is we can win some of those close games. So it’s back to work."

The Cardinals certainly have the pieces.

Quarterback Drew Plitt returns for a sixth season. Will Jones and Tye Evans, who split carries during the second half of last season, are back. Justin Hall and Yo'Heinz Tyler are expected to again form one of the league's top receiving tandems and all five offensive line starters remain in place.

Defensively, nine of 11 starters come back from a squad that had a league-high 18 takeaways. Four players earned all-conference honors, including linebacker Anthony Ekpe, who could move into a starting job after recording a team-high five sacks.

“The mentality for everybody else changes, but ours is the same," Plitt said. “Guys are going to be gunning for us."

The conference's landscape also has changed.

With perennial title contenders Buffalo and Ohio undergoing late coaching changes, Kent State and star quarterback Dustin Crum are favored in the East Division. The Golden Flashes' only MAC title came in 1972 with Hall of Fame linebacker Jack Lambert. Ohio, Buffalo and Miami (Ohio) are all expected to challenge.

Ball State may faces its strongest test in the West from Toledo — once it picks a quarterback. Eli Peters retired in July because of injury complications and is now a graduate assistant where he can help the other three — Carter Bradley, Dequan Finn and Tucker Gleason, a transfer from Georgia Tech.

“There are three guys that are more than capable of leading our football team and helping this team play championship-type football," coach Jason Candle said.

Whether it will be enough to dethrone the loaded Cardinals remains to be seen.

Don't rule out a title run by Western Michigan.

Coach Tim Lester's high-scoring offense returns almost entirely intact. Quarterback Kaleb Eleby will be working with the Broncos' top three rushers, two of their top three receivers and four starting linemen from last season. The defense allowed the fourth-fewest yards per play (5.6) and recorded 19 sacks. So if it can cut the 34.2 points allowed, the Broncos could be in the title hunt.

“We have goals and we started talking about them last January, really," Lester said. “I think they're focused, I think they know what we've got to get done."

Former Ohio coach Frank Solich announced his retirement in June, citing a heart condition. The 76-year-old Solich was tied for the fourth-longest tenure of any FBS coach, going 115-82 and leading Ohio to 11 bowl bids in 16 seasons. He also went 58-19 at Nebraska.

“He (Solich) transformed the Bobcat football program and I believe most of our programs would point to him as a model for how to build and sustain a program," commissioner Jon Steinbrecher said. “The winningest coach in Mid-American Conference history, quite an achievement.""

Buffalo also had to fill a hole when coach Lance Leipold bolted for Kansas in late April.

The Bulls hired Maurice Linguist, who spent last season with the NFL's Dallas Cowboys, to run a team that scored 43.4 points per game last season but has lost conference MVP Jaret Patterson to the NFL.

“We want to build the most dominant football program in the Mid-American Conference," Linguist said. “We will make people uncomfortable with how physical we play. We will play with a shocking level of effort.”

While power-conference teams quickly embraced the new rules on names, images and likenesses, it concerns Steinbrecher.

“It is unfortunate we do not have a single national standard guiding us," he said during his state-of-the-conference speech. “It is a challenge to run national championships without national standards of conduct. Quite frankly, this is a failure by the entire association (NCAA) and reflects a lack of strategic direction and execution."