Bearcats break through, No. 1 Alabama awaits in Cotton Bowl 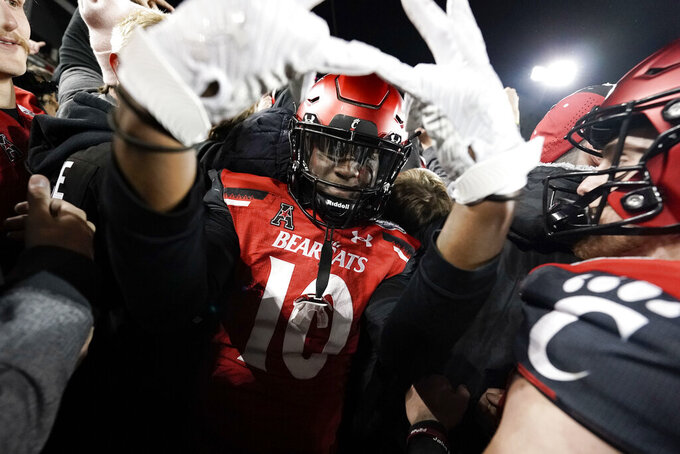 ARLINGTON, Texas (AP) — Cincinnati is the first outsider to make the College Football Playoff. Alabama is the standard bearer.

The two will meet in a semifinal game deep in the heart of Texas on New Year’s Eve in the Cotton Bowl.

American Athletic Conference champion Cincinnati (13-0) was fourth in the CFP rankings released Sunday to become the first non-Power Five team to make the final four. Top-seeded Alabama (12-1) is making its seventh appearance in the eight seasons of the four-team format and will play its 12th playoff game.

Fickell said his team has done an “unbelievable job” the entire season handling expectations and distractions.

“More than anything, our guys are just incredibly excited to be challenged," Fickell said. "For us and the program, it’s an incredible opportunity and a great measuring stick.”

The Bearcats had only two victories this season over Top 25 teams, but one of those was 24-13 at Notre Dame on Oct. 2. That was the only loss this season for the Fighting Irish, who finished fifth in the CFP and was the first team out of the playoff. Cincinnati won the AAC title game Saturday 35-20 over Houston, which had an 11-game winning streak. The Bearcasts are the last unbeaten team standing.

“This will be a real challenge for us in every way, shape and form,” Alabama coach Nick Saban said.

Alabama has won six national titles under Saban, three of those coming in the short CFP era. This is the fifth time the Crimson Tide is the No. 1 seed, and are the first No. 1 team in the Cotton Bowl since Texas in 1978.

The Tide won the SEC championship game 41-24 over previously unbeaten Georgia, which is the No. 3 seed and will play Big Ten champion Michigan in the Orange Bowl, the semifinal to be played after the Cotton Bowl on Dec. 31. The championship game is Jan. 10 in Indianapolis.

This will be Alabama's third CFP semifinal game at AT&T Stadium, the home of the NFL’s Dallas Cowboys. The Tide won the first two during national championship seasons. They beat Michigan State 38-0 in the Cotton Bowl six years ago, and last Jan. 1 beat Notre Dame 31-14 in a Rose Bowl game that was relocated from California because of the pandemic.

Cincinnati is in its first Cotton Bowl, and second New Year’s Six game in 2021. The Bearcats lost 24-21 in the Peach Bowl when Georgia kicked a 53-yard field goal with three seconds left in the game in Atlanta. More than 30 current Cincinnati seniors played in that game.

“Obviously this is a different football team, but the caliber and a lot of the things in the atmosphere, you know what we’ve got to expect,” Fickell said.

The Cotton Bowl is a matchup of standout quarterbacks. One is wrapping up his college career, the other is just getting started.

Desmond Ridder, who opted to return to Cincinnati as a senior for the chance to get in the playoff, has 44 career wins to trail only Kellen Moore (50 at Boise State) and Colt McCoy (45 at Texas) for the most all-time among FBS quarterbacks. His 12,281 total yards are AAC and school career records. He has 3,190 yards and 30 TDs passing this season, and run for 361 yards and six TDs.

First-year 'Bama starter Bryce Young has thrown for 4,322 yards with 43 TDs and only four interceptions in 462 attempts. The sophomore is a likely Heisman Trophy finalist, with a chance to become the first Tide quarterback to win college football’s highest individual award.

Saban said junior receiver John Metchie suffered a season-ending ACL injury in his left knee on a non-contact play in the SEC title game after he had six catches for 97 yards and a TD in the first half. Metchie was second in the SEC with 96 catches, and caught the game-winning two-point conversion in the Tide's four-OT victory at Auburn.

Along with its two CFP semifinal games there, Alabama has won three season openers at AT&T Stadium.

Ohio State won the first national championship game in the CFP era when the Buckeyes beat Oregon 42-20 at AT&T Stadium on Jan. 12, 2015. Fickell was a defensive coordinator for the Buckeyes, who went in that initial playoff as the No. 4 seed, and began with a 42-35 win over top-seeded Alabama in their semifinal at the Sugar Bowl.