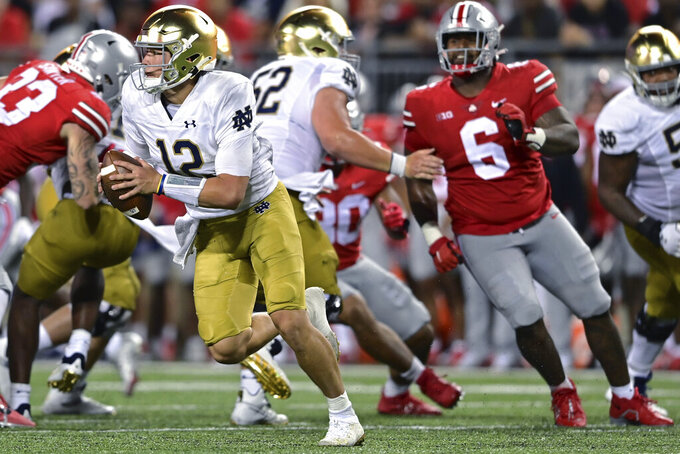 Then he followed the script.

After impressing his new coach with a poised season-opening performance against No. 2 Ohio State, Buchner will get to show what he learned from his first big test and why coach Marcus Freeman is excited to watch him when No. 8 Notre Dame hosts Marshall on Saturday.

“We’ve got ourselves a quarterback,” Freeman said following Notre Dame's 21-10 loss to the Buckeyes. “There’s a strong belief in what he can do for this football program.”

Nobody expected Buchner to be perfect in what could have been his most daunting challenge all season — matching wits against a national championship contender in front of 107,000 mostly hostile fans and on prime-time national television.

Still, he took care of the ball and kept the Fighting Irish in contention — and his toughness was evident right from the start.

On the first snap, Buchner faked a handoff, threw to his right and took a big hit in the chest from Buckeyes defensive end J.T. Tuimoloau. Lorenzo Styles caught the pass and turned it into a 54-yard gain. Tuimoloau's personal foul penalty added 15 yards to the play.

Buchner completed his first eight throws for 128 yards to help quiet the raucous crowd. By the time he threw an incompletion, midway through the second quarter, the Irish led 10-7 and took that lead into halftime.

But as the Buckeyes ratcheted up the pressure and stiffened against the run, Buchner struggled and the offense stagnated. Notre Dame gained just 72 total yards as Ohio State dominated the second half and the Buckeyes' offense eventually wore down the Irish defense.

“It wasn’t clicking the second half,” Buchner said. “That’s what killed us.”

Buchner was 10 of 18 passing for 177 yards, no touchdowns and no interceptions and rushed for 18 yards on 11 carries.

And the Buckeyes punished him. They logged three sacks, one quarterback hurry, hit Buchner at least a dozen times, and at one point Buchner hurt an ankle.

“He got beat up,” said Freeman, who intentionally limited the number of rushes Buchner took. “We knew going into that game, we were going to have to run Tyler Buchner.”

The blue-chip recruit from Southern California provided a glimpse of skills in 10 appearances last season off the bench.

His speed, athleticism and grasp of the read-option made him a catalyst in an explosive ground game. Buchner ran 46 times for 336 yards and three TDs while completing 21 of 35 passes for 298 yards with three scores and three interceptions.

Against the Buckeyes, though, Freeman wanted to slow Ohio State's fast-paced, usually high-scoring offense by playing it safe.

“That was our plan going into the game," Freeman said. "Be able to control the clock, limit their offensive possessions and run the football.”

Freeman and offensive coordinator Tommy Rees will likely turn Buchner loose as he gets more comfortable and experienced in the offensive system. And with the possible exception of No. 5 Clemson, no defense on the remaining schedule possesses the defensive prowess of Ohio State. Notre Dame hosts Clemson on Nov. 5.

If he is cut loose, Buchner could emerge as an explosive passer. He was accurate on short and intermediate throws and showed nice touch on deep balls against Ohio State. Notre Dame heads into the weekend ranked No. 12 in the FBS at 9.83 yards per attempt.

But to reach his potential as a pocket passer, Buchner will need better protection and perhaps fewer carries to remain healthy.

“That’s not our plan every week,” Freeman said. “But we knew that in order to try to establish a run game, we were going to have to run him a little bit.”

The Irish coaches also liked the leadership Buchner displayed. They said he stayed positive while talking to teammates on the sideline, even as their halftime lead slipped away.