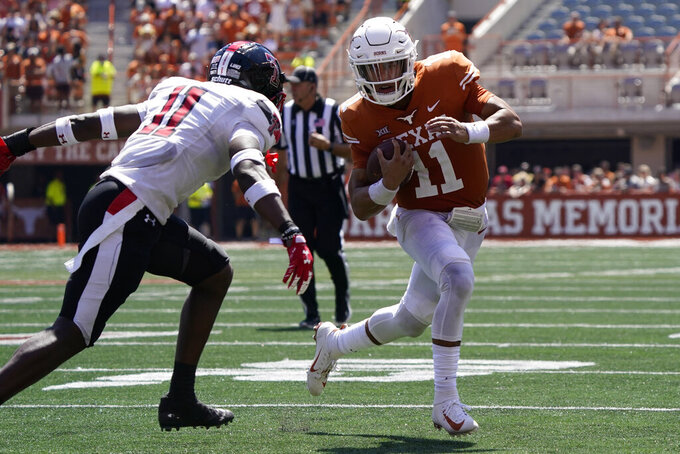 Some things to watch in Week 5 of the Big 12 Conference:

No. 21 Baylor (4-0, 2-0 Big 12) at No. 19 Oklahoma State (4-0, 1-0). A matchup Saturday night of the only Big 12 teams, other than six-time defending conference champion Oklahoma, to make it to the first Saturday of October undefeated. The Bears and Cowboys are also the only other ranked teams in the league. Baylor's first season for coach Dave Aranda ended with a 42-3 loss to Oklahoma State last December. But these Bears, led by Big 12 passing efficiency leader Gerry Bohanon and 100-yard rusher Abram Smith, are also greatly improved on defense. The Cowboys have a six-game winning streak, with their four wins this season only by an average margin of six points.

Kansas State coach Chris Klieman vs. No. 6 Oklahoma (4-0, 1-0). While the Wildcats (3-1, 0-1) are listed as 11-point underdogs, according to FanDuel Sportsbook, they were underdogs by even bigger margins of three-to-four TDs when winning in each of Klieman's first two seasons. K-State overcame a 21-point deficit in the second half to win 38-35 last year in Norman, after a 48-41 win at home in 2019. One significant difference this time is that the Wildcats will be without super senior quarterback Skylar Thompson (knee injury). The last Big 12 team to win three in a row against the Sooners was Texas from 1997-99.

Iowa State running back Breece Hall has run for a touchdown in a Big 12-record 16 consecutive games. ... This is the first Saturday this season with all 10 of the Big 12 teams playing conference games. ... Kansas State got its national-best 123rd non-offensive touchdown since 1999 when Malik Knowles returned a kickoff 99 yards last week at Oklahoma State. ... TCU has won six of its last seven games against Texas. The last four wins by the Horned Frogs in the series came when they were coming off a loss the previous week. They lost at home to SMU last week. ... Texas Tech has lost six straight on the road and is 1-10 since 2019. The lone win was two years ago at West Virginia, where the Red Raiders play Saturday.

Kansas is a nearly five-TD underdog going to Iowa State, a preseason Big 12 favorite and top 10 team looking to rebound from already losing twice, including its conference opener. The Cyclones have won the last six in the series by an average margin of nearly 24 points. The Jayhawks (1-3, 0-1) have lost 54 consecutive Big 12 road games since a 35-33 win in Ames on Oct. 11, 2008.

Texas quarterback Casey Thompson is set for his third start since replacing Hudson Card as QB for the Longhorns, who play at TCU. The Longhorns have scored touchdowns on 18 of 22 drives Thompson has started this season. He threw for five TDs and ran for another in his first Big 12 start, a 70-35 win over Texas Tech last week.