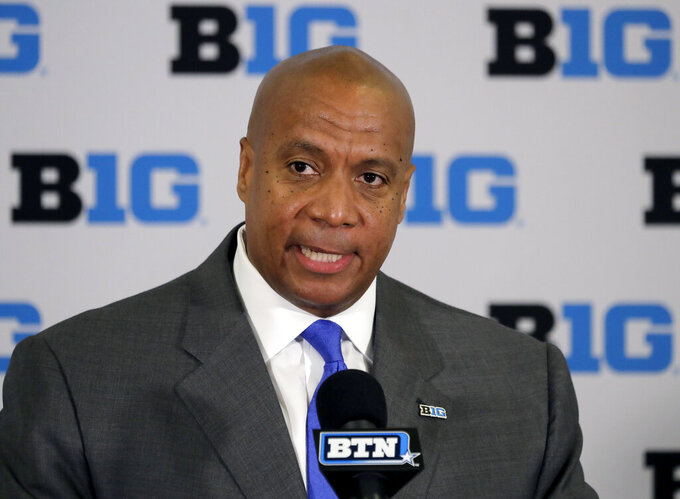 FILE - In this June 4, 2019, file photo, Minnesota Vikings chief operating officer Kevin Warren talks to reporters after being named Big Ten Conference Commissioner during a news conference in Rosemont, Ill. After the Power Five conference commissioners met Sunday, Aug. 9, 2020, to discuss mounting concern about whether a college football season can be played in a pandemic, players took to social media to urge leaders to let them play.(AP Photo/Charles Rex Arbogast, File)

After facing backlash from players, parents, fans and others, Big Ten commissioner Kevin Warren attempted to elaborate Wednesday on the decision to postpone football season until spring.

The first-year commissioner has been criticized for a lack of transparency in laying out why, less than a week after the conference released a revised schedule, it was necessary to pull the plug.

“We thoroughly understand and deeply value what sports mean to our student-athletes, their families, our coaches and our fans,” Warren wrote in what was called an “Open Letter to the Big Ten Community.”

“The vote by the Big Ten Council of Presidents and Chancellors (COP/C) was overwhelmingly in support of postponing fall sports and will not be revisited. The decision was thorough and deliberative, and based on sound feedback, guidance and advice from medical experts.”

With the decision to not play in the fall final, schools are forging ahead toward a spring season.

Coaches such as Ohio State's Ryan Day, Penn State's James Franklin and Wisconsin's Paul Chryst have said the key to pulling off a season after the first semester is starting it early enough so that it doesn’t disrupt a fall season in 2021.

“While a decision has been made by the presidents of the Big Ten Conference to postpone the fall season, we view this as a temporary delay,” Ohio State athletic director Gene Smith said, adding that school president Kristina M. Johnson has told the athletic department to prepare for the possibility of bringing fall sports teams back to practice and competition by the end of the year.

“We are actively planning for the winter and spring seasons for all sports, including the return of football,” Smith added.

The Big Ten and Pac-12 announced Aug. 11 there would be no fall season in their conferences. The Pac-12 rolled out its decision with comment from its medical experts about concerns regarding the spread and long-term effects of COVID-19. Warren did not make Big Ten medical advisers available and spoke mostly in generalities about the importance of keeping athletes safe during the pandemic.

The blowback was almost immediate, especially with the Atlantic Coast Conference, Big 12, Southeastern Conference and three other Football Bowl Subdivision leagues proceeding with plans to play this fall.

There were rumblings some schools, notably Nebraska and Ohio State, might go rogue and create their own schedules for the fall — building up hopes for football-hungry fans.

In his letter Wednesday, Warren listed primary factors that led to the Big Ten's decision:

— Transmission rates continue to rise at an alarming rate with little indication from medical experts that campuses, communities and the country could gain control of the spread before the start of competition.

“As our teams were ramping up for more intense practices, many of our medical staffs did not think the interventions we had planned would be adequate to decrease the potential spread even with very regular testing,” he wrote. “As the general student body comes back to campus, spread to student-athletes could reintroduce infection into our athletics community.”

— There is too much unknown about the virus, recovery and longer-term effects. In particular, Warren mentioned the risk of cardiomyopathy, a condition that makes it difficult for the heart to pump blood and can lead to heart failure.

— Concerns about the ability in contact sports to adequately mitigate infection risk through social distancing, face coverings and proper hygiene. Warren said the start of full-contact practices and games would make contact tracing more difficult and that there could be frequent and significant disruptions if a season were conducted.

“We understand the disappointment and questions surrounding the timing of our decision to postpone fall sports, especially in light of releasing a football schedule only six days prior to that decision,” Warren wrote.

He said the plan when the new schedule was released was to operate as if a season would be played while simultaneously monitoring the spread of the virus, testing and medical concerns as full-contact practice drew closer.

“Accurate and widely available rapid testing may help mitigate those concerns, but access to accurate tests is currently limited,” he wrote.

Warren noted the decision to postpone the season would have massive financial implications on the schools, with some schools saying they stand to lose more than $100 million in projected revenue.

“We understand the passion of the many student-athletes and their families who were disappointed by the decision," Warren wrote, “but also know there are many who have a great deal of concern and anxiety regarding the pandemic.”