California looks to remain unbeaten at home vs. Washington 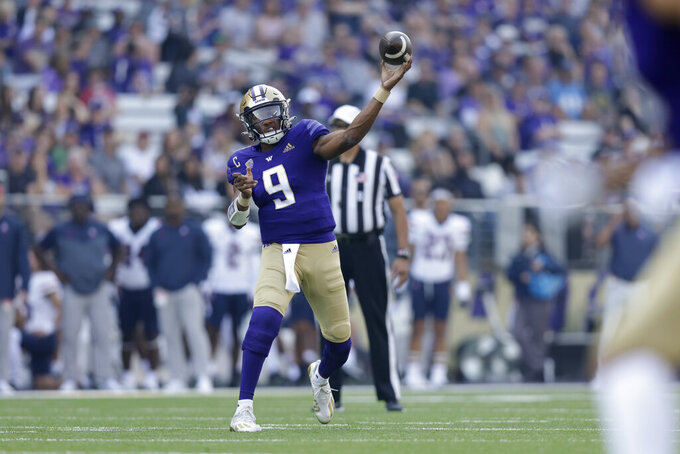 Line: Washington by 7 1/2, according to FanDuel SportsBook.

An intriguing conference matchup where Cal is trying to remain unbeaten at home while Washington is looking for its first road win of the season. The Golden Bears also are winless on the road but are 3-0 at Memorial Stadium.

Washington WR Rome Odunze vs California’s secondary. Odunze is coming off the best game of his career (nine catches for 169 yards and two TDs) and has 561 yards receiving over his last four games. He is the first player in school history to top 100 yards receiving in four consecutive games. Cal has the seventh overall defense in the Pac-12 and is allowing 256.7 passing yards per game.

Washington: QB Michael Penix Jr. set a Huskies single-game record last week with 516 yards passing and four TDs against Arizona. He is the only FBS quarterback this season to have three games with at leas 330 yards passing, four touchdowns and no interceptions.

California: QB Jack Plummer has passed for 260 yards or more with at least one touchdown in each of his last four games. His streak of 137 straight passes without an interception ended at Colorado last week.

Washington has already surpassed its win total (four) from 2021. … Cal is 1-7 in games decided by seven points or fewer since 2021. … The Huskies have scored 40 or more points four times this season. They didn’t score 40 in any game last year. ... Washington has scored a touchdown on its opening drive in all seven games. ... The Bears have at least one takeaway in 19 consecutive games, the longest active streak in the FBS. … Penix has 12 career games with at least 300 yards passing. … Cal has been limited to 22 points in its last two games combined. … Cal RB Jaydn Ott has been held under 100 yards in all three of the Bears' losses this season. … Cal K Dario Longhetto is coming off his first game missing multiple field goal attempts.