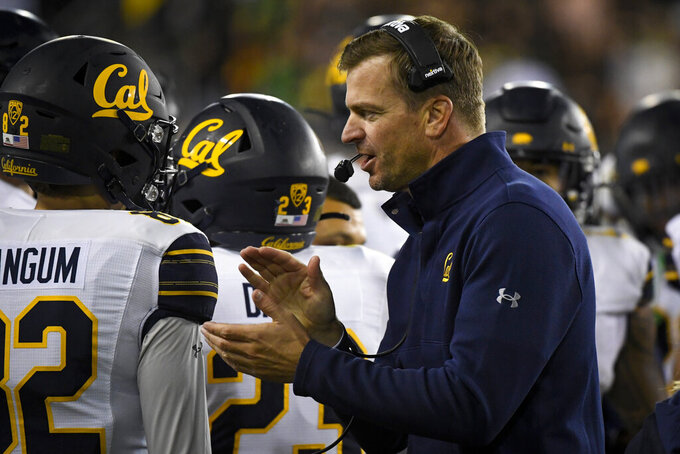 FILE - California head coach Justin Wilcox encourages his players during the fourth quarter of an NCAA college football game on Oct. 15, 2021, in Eugene, Ore. Cal ranks last in the conference in scoring and sixth worst in the Power 5 at 23.2 points per game since the school replaced the offensive-minded Sonny Dykes with the defensive-oriented Wilcox in 2017. (AP Photo/Andy Nelson, File)

The Bears look to get off a fast start in coach Justin Wilcox's sixth season. Cal lost its opener the past two seasons and hasn't been to a bowl since the 2019 season. UC Davis is coming off an FCS playoff appearance last season. The Aggies are looking for their first win over a Power Five team since beating Stanford 20-17 in 2005.

UC Davis: WR Trent Tompkins. The versatile Tompkins does a bit of everything for the Aggies. He tied for the team lead last season with six TD runs, ranked second with 448 yards rushing, had 12 catches for 77 yards, threw 18 passes for 102 yards and a TD and returned a punt for an 85-yard touchdown.

California: QB Jack Plummer. The Purdue transfer replaces four-year starter Chase Garbers. Plummer threw for 3,405 yards in 17 games for the Boilermakers with 26 TD passes and 10 interceptions. He started the first four games last season with seven TD passes and no interceptions before being replaced with a 3-1 record, leading to his transfer after the season.

Cal has outscored UC Davis 372-36 in 10 all-time meetings but only two of those meetings have come since 1940. ... The Bears have never lost to an FCS team since the start of that division in 1978. ... The Aggies are 6-10 against FBS teams since joining Division I in 2004. ... Cal’s top returning rusher is Damien Moore, who was second on the team with 518 yards and led the team with six TD runs last season. ... Cal’s seven returning receivers made just on start between them in 2021.