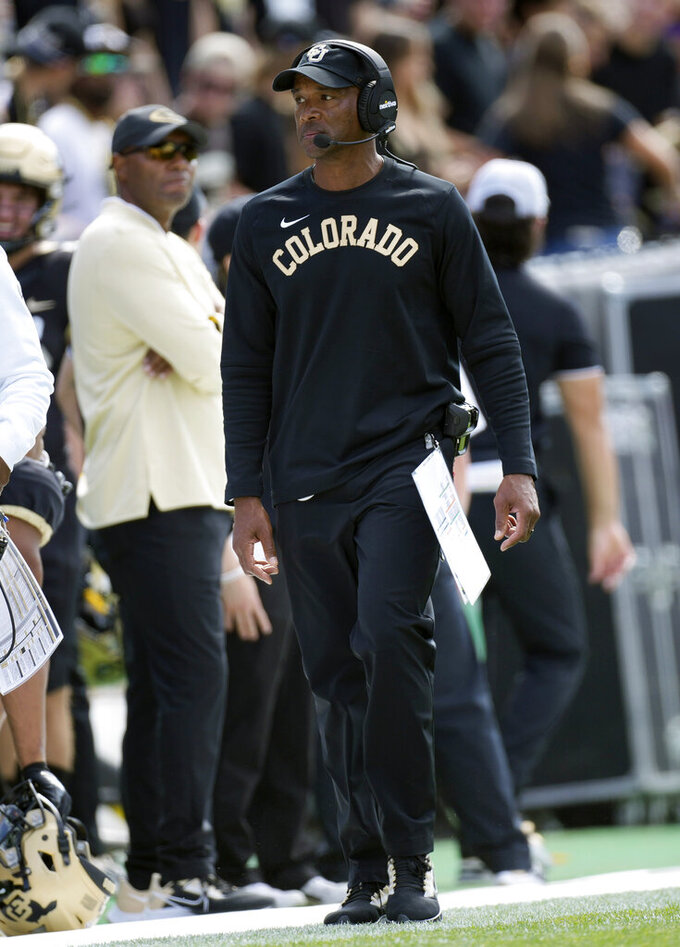 Colorado head coach Karl Dorrell walks the sideline in the first half of an NCAA college football game against Southern California Saturday, Oct. 2, 2021, in Boulder, Colo. Dorrell shoved a television photographer from a Denver CBS affiliate while leaving the field after the loss. (AP Photo/David Zalubowski)

“Coach Dorrell sends his apologizes to the local journalist who he intercepted after today's game,” George tweeted about three hours after the Trojans sent the Buffs to their fourth consecutive loss with a 37-14 rout. “We treat journalists with respect and apologize for falling short of that today.”

Tim Wieland, vice president and general manager of CBS affiliate KCNC-TV in Denver, tweeted, “I just spoke with Rick. I appreciate his genuine concern for our photojournalist and his sincere apology, along with the apology from Coach Dorrell.”

George's tweeted apology, however, was heavily criticized on social media because the apology didn't come directly from his head coach. Others derided George for characterizing Dorrell's actions as an interception.

Dorrell wasn't asked about the incident nor did he mention it in his postgame news conference. A short video clip was posted on social media a few hours after the game ended.

Dorrell is 5-6 in his two seasons in Boulder. He was hired on Feb. 23, 2020, following Mel Tucker's abrupt departure to Michigan State. COVID-19 shut down all college sports about three weeks later and it would be 288 days before Dorrell got to run his first practice.

The Buffs went 4-2 in his first season when half a dozen games were canceled because of the pandemic. The Buffs lost to Texas in the Alamo Bowl.

They opened this season with a win over lower-division Northern Colorado but have since lost to Texas A&M, Minnesota and USC at home and Arizona State on the road.

They are off next weekend before hosting Arizona on Oct. 16.