Column: Get comfortable with college players being paid 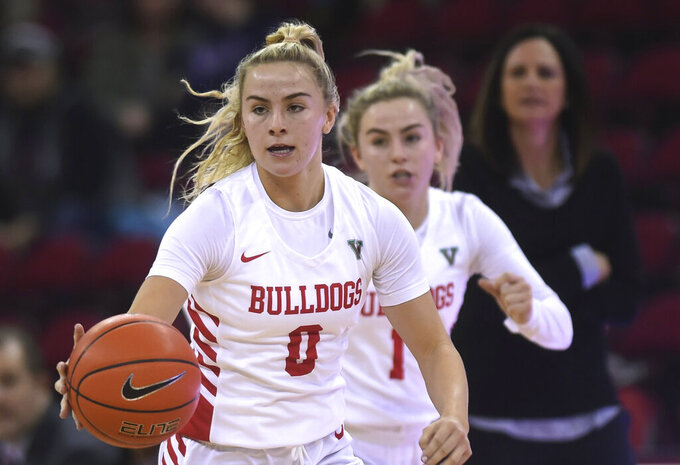 Fresno State's Hanna Cavinder, left, with sister Haley Cavinder, center, and head coach Jaime White, background right, in the game against UC Merced on Dec. 28, 2019, in Fresno, Calif. It is a man's world six months after the NCAA cleared the way for college athletes to earn money on their celebrity. Men lead the way in total name, image and likeness compensation and have more NIL activities than women. (Eric Paul Zamora/The Fresno Bee via AP)/The Fresno Bee via AP)

Jimbo Fisher should have leaned into it.

Instead of going off about rumors that a multimillion-dollar, booster-funded NIL program is behind Texas A&M's monster recruiting class, the Aggies' coach could have injected some sanity into the current panic sweeping college football.

Throughout the history of college sports paying players equaled cheating.

College athletes can now be compensated for use of their names, images and likenesses. The NCAA surrendered in this fight last year, bringing down the barriers between two groups that always seem to connect through capitalism: People with talent and people with money.

Everyone involved needs to come to grips with this new reality for college football to transition into its next iteration.

Until then, we'll get what we had this week in the Southeastern Conference, which was wildly entertaining, though not terribly productive.

Fisher went flame on at his signing day media availability, taking aim at those who have perpetuated unfounded rumors that he and his staff were recruiting with a $30 million NIL war chest behind them. He defended his program and took to task those perpetuating internet misinformation, without calling out Mississippi coach Lane Kiffin by name.

Totally understandable. No one wants to be called a cheater, even when it's not clear that what you have been accused of is against the rules.

One particular part of Fisher's diatribe stood out.

“To me, it’s insulting to the players that we recruited that that’s why they would come here,” he said. “You ever been to a game here? You ever come to school here and see the education? You ever talk about the 12th Man and the Aggie network when you’re done? There ain’t a better university in this country.”

This is the outdated culture of college sports. Even as schools race to publicly embrace NIL, it is still somehow "insulting” to accuse an elite football player of considering how much money he could make when he decides where to ply his trade.

This attitude is oddly pervasive throughout sports, both college and professional. When was the last time a free agent said: “I'd like to win and I'd like to live close to home, but ultimately I took the biggest payout.” As if there is something wrong with that.

Fisher and his fellow coaches have been playing this tune a lot lately.

He was lured to Texas A&M from Florida State five years ago by a 10-year, fully guaranteed contract worth $75 million. Now 10-year deals and salaries pushing $10 million per year are all the rage.

“I think it just comes down to, for me, an alignment about excellence,” Brian Kelly said after leaving Notre Dame to take a 10-year, $95 million deal at LSU. “That’s what I’m about. Excellence in academics and athletics here at LSU and seeing that, feeling that, and now knowing that we can go off together and fulfill that goal.”

In big-time college sports, money is everywhere: Millions for coaches from schools chasing glory. Hundreds of millions for conferences from television networks desperate for content to keep them relevant.

But nobody wants to talk about it —- at least not in public. As Sonny Corleone told his brother-in-law during dinner in the “Godfather”: “We don't discuss business at the table.”

Coaches are starting to come to terms with players getting a piece of the pie.

They really have no choice. If your job is to recruit players, standing in the way of them getting a better deal is a losing position.

“I think it’s a good thing that players now have an opportunity to work and make money through name, image and likeness,” Alabama coach Nick Saban said. “I would hope we come up with some system in the future where – and I’m not accusing anybody of anything — but I don’t think players should make a decision about where they go to school relative to how much money they’re gonna make in name, image and likeness.”

The players have always picked schools based on money. And we're not talking hundred-dollar handshakes.

Money spent on facilities with waterfalls and barbershops. Money spent on locker rooms with iPads at every stall. Money spent by fans to pack huge stadiums and create the euphoric game-day experience players dream about.

Now the money can go straight into the players' pockets.

Fisher was right to push back on the premise Texas A&M somehow has an unfair advantage, that the Aggies took a short-cut to pass Alabama and Georgia in the recruiting rankings.

But it also would have been nice to hear him say: “We have a lot to offer at Texas A&M, including the opportunity for athletes, within the currently ambiguous rules, to make money."

Eventually, college sports needs to get comfortable discussing business at the table.