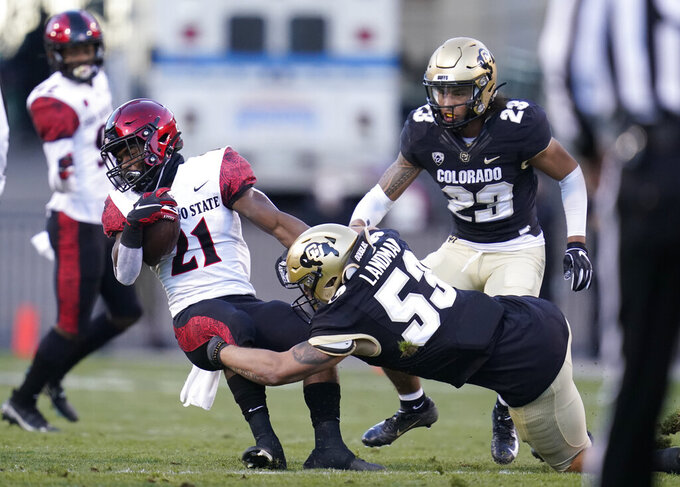 San Diego State running back Chance Bell, left, is pulled down by Colorado linebacker Nate Landman (53) after a short gain as Colorado safety Isaiah Lewis follows the play in the first half of an NCAA college football game Saturday, Nov. 28, 2020, in Boulder, Colo. (AP Photo/David Zalubowski)

Asked about the defense surrendering 10 points and how this could be a much-needed confidence boost, he pointed out his side of the ball only surrendered a field goal.

“(The defense) came to play today,” said Buffaloes tailback Jarek Broussard, who rushed for 124 yards. “They honestly won us the game.”

Colorado's offense did its part, too, with Sam Noyer running for a score and throwing for another in building an early 14-0 lead. He did throw an interception, though, that Aztecs cornerback Darren Hall returned for a 57-yard score.

“All in all, I'm glad we were able to pull out the win. It was led by our defense," Dorrell said. "Good teams find ways to win, right?”

Not bad for short notice.

The Buffaloes and Aztecs didn’t find out they were meeting on the field until Thanksgiving Day. Colorado (3-0, 2-0 Pac-12) was originally scheduled to travel to No. 19 USC for a Pac-12 South showdown, but it was canceled due to COVID-19 issues within the Trojans’ program.

San Diego State (3-3, 3-2 Mountain West) was available for a trip to Boulder when its contest at Fresno State was called off due to contact tracing concerns with the Bulldogs.

The kickoff for this contest was pushed back about 30 minutes due to testing for the Aztecs, which delayed their arrival at Folsom Field.

“We didn’t think the game was in jeopardy,” said Dorrell, whose team had their game canceled last weekend against Arizona State.

Hired last February, Dorrell hasn’t taken long to get the Buffaloes to buy in. He became the first Colorado coach to start his tenure 3-0 since Rick Neuheisel in 1995, which just so happened to boast a staff that included Dorrell as the offensive coordinator.

The Buffaloes have a chance at their first bowl appearance since 2016.

“I’m not even thinking about bowls right now,” Dorrell said. “Just the next job, the next task.”

The Aztecs were missing a big chunk of their offense with running back Greg Bell out due to a sore ankle. They also were missing dinged-up quarterback Lucas Johnson so they started Carson Baker before turning to Jordon Brookshire.

Baker, Brookshire and the offense struggled eluding the presence of Landman, who had three sacks and 3 1/2 tackles for loss. His roommate and fellow linebacker Carson Wells had a sack and four tackles for loss.

Defensive back Curtis Appleton put the finishing touches on the game by picking off Brookshire with around 30 seconds remaining.

“It’s a huge step for this defense,” said Landman, whose team surrendered a combined 74 points in the first two games. “It’s a huge confidence booster.”

The Aztecs missed two long field goals by Matt Araiza in the fourth quarter, including one that was blocked.

“We’re disappointed,” San Diego State coach Brady Hoke said. “The guys in that locker room, they are definitely going to get better because of the experience."

Colorado was cruising along with a 14-0 lead — and dominating time of possession — until a costly turnover late in the first half turned the momentum.

Hall read the route to perfection to pick off a Noyer pass and went untouched down the sideline for the score. That was followed by a 48-yard field goal Araiza to make it 14-10 just before intermission.

“That was a lift for everybody,” Hoke said.

Noyer had a hand in both scores for the Buffaloes in the first half. He capped a time-consuming, 16-play drive by scoring on a fourth-and-goal keeper from a yard out in the first quarter. He flipped a pass to Jackson for a 3-yard score in the second.

Colorado: At Arizona on Saturday.