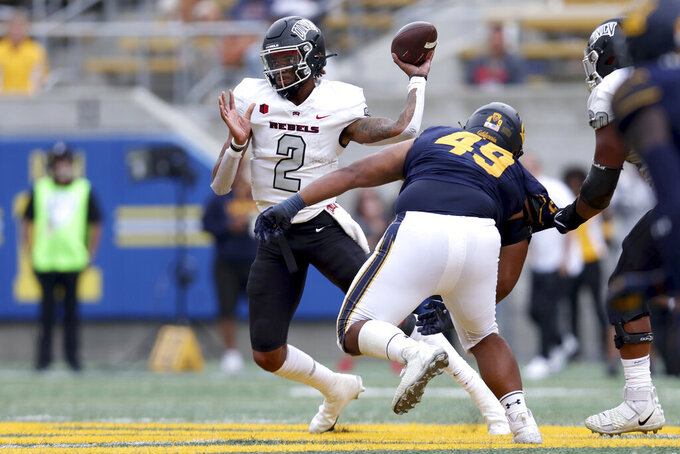 Line: Notre Dame by 11½, according to FanDuel Sportsbook.

Notre Dame desperately needs a win. The Fighting Irish have lost their first three games under coach Marcus Freeman and are trying to avoid their first 0-3 start since 2007. There's even more urgency with a tougher schedule following Saturday. Notre Dame plays its next two at North Carolina and at No. 12 BYU. Cal is 2-0 for the first time since 2019 and an unbeaten nonconference mark would give the Golden Bears momentum heading into conference play against Arizona.

Irish QB Drew Pyne vs. Cal defense. The first priority for the Irish is demonstrating they have a competent offense with Pyne as their signal-caller. He replaces the injured Tyler Buchner, who is expected to miss the rest of this season. The Irish have struggled even with Buchner, ranking No. 117 out of 131 FBS teams in scoring offense (15.5 points) and total offense (302.0 yards). The ground game hasn't been much better, averaging 103.0 yards to rank No. 110. Cal's defense has been especially proficient keeping opponents out of the end zone, allowing 13.5 points per game. LB Jackson Sirmon already has 17 tackles, one pass breakup and one forced fumble.

California: QB Jack Plummer, who started his career at Purdue, returns to Indiana after a strong first two games. He’s 51 of 74 with 546 yards, four TDs and two interceptions. Plummer also played well against Notre Dame while starting for the Boilermakers last year. He went 25 of 36 with 187 yards and one TD that day before leaving in the second half with an injury.

Notre Dame: WR Lorenzo Styles may be the most explosive offensive player on the roster. He has eight receptions for 123 yards, an average of 15.4. He also had a 22-yard run against Marshall. Notre Dame needs him to play a more significant role to turn things around.

Notre Dame's defense has not forced a turnover in the first two games. … Cal DE Xavier Carlton has six tackles and 2.5 sacks this season. ... Saturday marks the first time these schools have played since 1967. They've met four times, starting in 1959, and the Irish have won all four. ... Golden Bears RB Jayden Ott has 198 yards from scrimmage and three TDs.