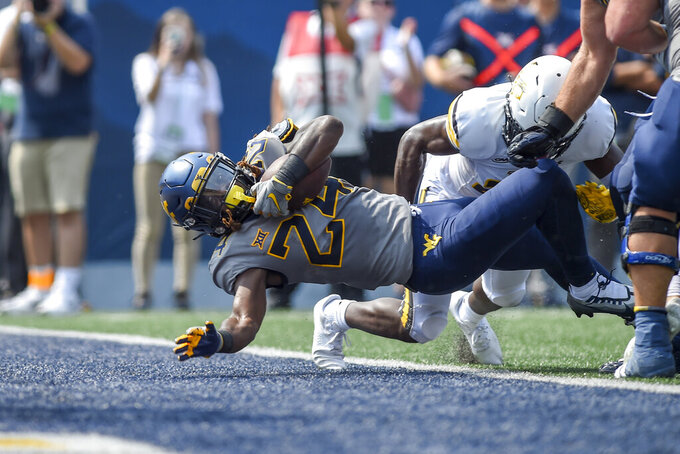 West Virginia running back Tony Mathis Jr. (24) rushes in for a touchdown against Towson during the first half of an NCAA college football game in Morgantown, W.Va., Saturday, Sept. 17, 2022. (AP Photo/William Wotring)

MORGANTOWN, W.Va. (AP) — On a day when West Virginia held a ceremony to honor some of its greatest offensive players, the Mountaineers put together their best showing in a year.

Tony Mathis rushed for 104 yards and two touchdowns, CJ Donaldson ran for 101 yards and three scores, and West Virginia breezed to a 65-7 victory over Towson on Saturday.

Although it didn’t quite make up for opening the season with close losses to No. 23 Pittsburgh and Kansas, West Virginia piled up 624 yards of offense, scored touchdowns on six of its seven first-half possessions and led its Championship Subdivision opponent 45-7 at halftime before pulling back with a short week before its next game.

Johnson, a freshman, had his second 100-yard rushing effort of the season and pushed his TD total to six. He had just nine carries, an average of 11.2-yards per attempt. He also blocked a punt in the opener against Pitt. Most of his yards Saturday came on an 82-yard scoring run.

Playing mostly on defense growing up, Donaldson came to West Virginia as a tight end but was quickly converted to running back and is still getting accustomed to his new role.

“That's my third game ever playing running back," Donaldson said. "Today I kind of surprised myself with that long run.”

Mathis exceeded his career total for touchdowns. He had one TD in 23 previous games.

West Virginia (1-2) had 316 rushing yards. Its six rushing touchdowns were the most since it had seven both against Connecticut and Western Michigan in 2007.

And yet Mathis felt it wasn't a perfect game from the backfield.

"Still a lot left. You can always get better every game," he said.

West Virginia's JT Daniels completed 16 of 24 passes for 174 yards in the first half, including a 2-yard TD pass to Kaden Prather. Daniels was replaced by Garrett Greene, Will Crowder and Nicco Marchiol in the second half.

Numerous other players saw their first significant action on both sides of the ball for West Virginia, including wide receivers Cortez Braham and Jeremiah Aaron. Braham had five catches for 60 yards and Aaron caught four passes for 29 yards, including his first career TD catch, a 5-yarder from Crowder in the fourth quarter. Redshirt freshman Preston Fox caught a 26-yard TD from Marchiol to close the scoring.

“Really disappointed in our kickoff,” Brown said. “We worked kickoff more than any special teams unit all week.”

Ex-WVU quarterback Geno Smith and wide receivers Tavon Austin and Stedman Bailey were inducted into West Virginia’s Sports Hall of Fame before the game. Bailey was recognized along with inductees from other sports at the end of the first quarter. Smith, now the Seattle Seahawks’ starting quarterback, and Austin, a member of the Buffalo Bills’ practice squad, did not attend. The three were members of the 2011 team that beat Clemson 70-33 in the Orange Bowl and all three set multiple school offensive records in 2012.

In the second quarter, basketball coach Bob Huggins received a lengthy ovation after being introduced. Huggins was inducted into the Basketball Hall of Fame a week ago.

Towson: The Tigers, who have 50 new players on their roster, were limited to 180 yards of offense and held the ball for just 19 minutes. Towson had averaged 193 rushing yards over its first two games.

“Hats off to West Virginia and coach Brown. The mistakes that they made in the previous two weeks, they did not at all make today," Towson coach Rob Ambrose said. "Didn’t turn the ball over either. We never got in a rhythm offensively, and while it’s great to return the opening kickoff, it actually kinda bit us in the foot. Very, very impressed with West Virginia’s offense. I think they’ll do quite well moving forward.”

West Virginia: The Mountaineers' defense showed significant improvement statistically after the team's first 0-2 start since 1979. Entering Saturday, West Virginia’s 401.5 yards and 46.5 points allowed per game had ranked toward the bottom of the Bowl Subdivision.