Duke aims to move past 2020 struggles in opener at Charlotte 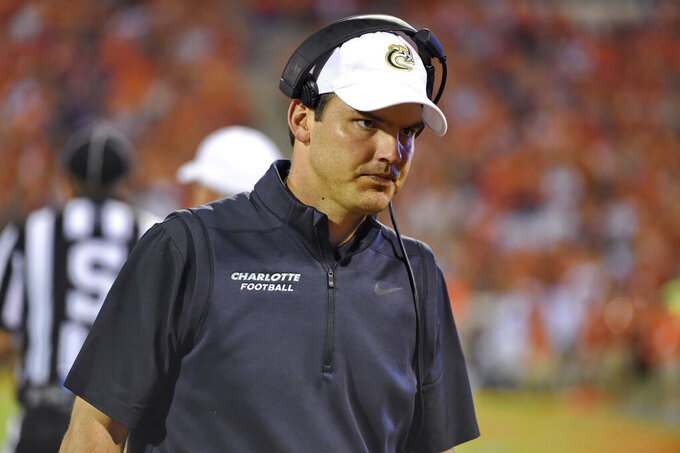 FILE - Charlotte coach Will Healy walks on the sideline during the second half of the team's NCAA college football game against Clemson on Sept. 21, 2019, in Clemson, S.C. Healy and the 49ers open the season Friday against Duke. (AP Photo/Richard Shiro, file)

Duke spent an offseason working to rebuild chemistry, confidence and cleaner execution. The Blue Devils get their first indication Friday night as to how much progress they’ve made.

Duke travels to Charlotte for an instate road opener, which marks the first time a power-conference team has visited the 49ers’ campus stadium. It comes after a two-win season that represented a huge stumble for a Duke program that had become a regular bowl team under longtime coach David Cutcliffe.

“I think the biggest thing you find out: have you done all the little things as a coach to be disciplined to take care of the ball, to be penalty-free, all of those little things that are a real test in the opener?” Cutcliffe said.

The Blue Devils’ last win came on Halloween in a lopsided margin (53-19) against the 49ers, which marked one of just six games Will Healy’s squad got to play due to cancellations and postponements caused by the COVID-19 pandemic.

That included just two home games for the Conference USA program, and none before late October, in what Healy described as a “terrible experience” for his players.

This year looks a little better. In addition to Duke’s visit, the 49ers will play two power-conference teams in the same season for the first time when they visit Illinois in October.

“These guys have sacrificed a lot to be able to have a chance to play football games,” Healy said. “This is what makes it fun, for them to be rewarded with a home football game against an ACC opponent. And we’re going to figure out how good we are very quickly.”

Some other things to know about Friday’s Duke-Charlotte game:

Duke was the Bowl Subdivision’s worst team last year in protecting the football, racking up 39 turnovers – at least 14 more than any other team. That included a national-high 15 interceptions from Chase Brice, who has since transferred to Appalachian State.

The Charlotte win last year was one of just two games in which Duke committed fewer than two turnovers.

Duke quarterback Gunnar Holmberg is atop the depth chart to take over for Brice in what would be his first career start.

The 6-foot-3, 205-pound Holmberg has appeared in seven games and missed the 2019 season with a preseason knee injury. He completed 18 of 25 passes for 161 yards with two interceptions last year and also offers the ability to move the chains with his legs.

He was elected as one of Duke’s three captains after Cutcliffe praised his leadership with teammates through the summer.

“You almost could see it coming for all the right reasons,” Cutcliffe said.

LOOKING FOR A FIRST

Charlotte is 0-6 against power-conference teams in its nine-season history, including all three matchups with Atlantic Coast Conference programs.

Cutcliffe is in his 14th season at Duke to tie Alabama’s Nick Saban for sixth among the nation’s longest coaching tenures in the power conferences.

Duke is 9-4 in season openers under Cutcliffe, though the Blue Devils have lost the past two to highly ranked teams Alabama in 2019 and Notre Dame last year in the Fighting Irish’s one-year run as a full ACC football member due to the COVID-19 pandemic.