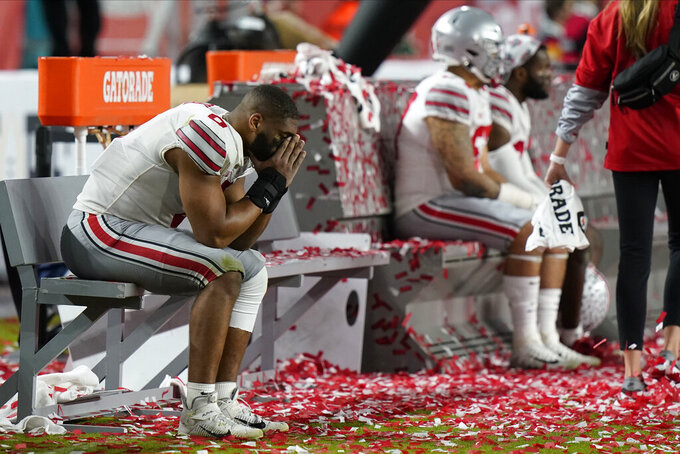 Justin Fields and the prolific Ohio State offense, fresh from piling up 639 yards in a semifinal win over Clemson, couldn’t find the same groove against Alabama on Monday night.

Fields, who passed for 385 yards and six touchdowns against Clemson, had some outstanding moments against Alabama but not enough to make a difference. The Tide built up a big lead by halftime and a smothering pass rush kept the Buckeyes offense in check on the way to a 52-24 Alabama win.

“On offense we couldn’t go score for score with them and it got out of hand,” Ohio State coach Ryan Day said.

Day acknowledged Fields was still bothered by a shot to the ribs that he took against Clemson that had him writhing in pain on the field.

“You know, he was not 100% tonight," Day said. "He was working through it and made some really good throws and made some gutsy plays and kept us in the game there for awhile.”

Fields wouldn't reveal much about how the injury affected his play. “I was able to be out there,” he said.

Ohio State running back Trey Sermon, who electrified the Buckeyes’ ground game in the three previous games, was lost to an injury during the first series, and the team’s best offensive lineman, Wyatt Davis, reinjured a knee late in the first half. Sermon had a single carry for two yards.

Master Teague III, who began the season as a starter, took over for Sermon and had touchdown runs of eight and four yards but Ohio State moved away from the run game in the second half as Fields had to look for chunk plays to try to catch up. The Buckeyes (7-1) had just 147 rushing yards, with Fields getting 67 of them.

Playing from behind for three quarters, Fields was 17 for 33 for 194 yards. Meanwhile, Ohio State’s defense couldn’t stop Heisman Trophy winner DeVonta Smith and keep Alabama out of the end zone.

“We came in and played physical and strong and we came to dominate," Alabama defensive tackle Christian Barmore said.

Fields, who is projected as a first-round draft pick, finished his second year as the Ohio State starter the same way he finished the first -- with a loss. He went 20-2 as a two-year starter.

“I was telling the younger guys that they have a lot of years left, and I was telling them to remember that and never, never let it happen again,” said Fields, who will be remembered for his leadership in an unpredictable season disrupted at every turn by the pandemic.

The Big Ten suspended the season in August, reinstating it a month later following a campaign led by Fields and others. Amid COVID-19 outbreaks that took key players out of the lineup, the Buckeyes won all five of the games they played in empty or nearly empty stadiums while remaining separated from their families.

There were anxious moments before the Big Ten changed the rules to allow Ohio State to play in the conference championship game. The Buckeyes dominated Northwestern with a 331-yard game from Sermon and despite a disappointing performance from Fields, who finished the game with a sprained thumb on his throwing hand.

In the 49-28 win over Clemson in the semifinal game, Fields cemented himself in Ohio State lore when he came back on the field and threw a touchdown pass after taking the vicious hit to the ribs.

Defensive tackle Haskell Garrett not only played the season but excelled despite having been shot in the face while breaking up an altercation on a street near campus in late August.

“When you look a team in the eye in a locker room after the long season we've been through, it's hard to start focusing on one or two plays or whatever it was, because they've been through so much,” Day said.