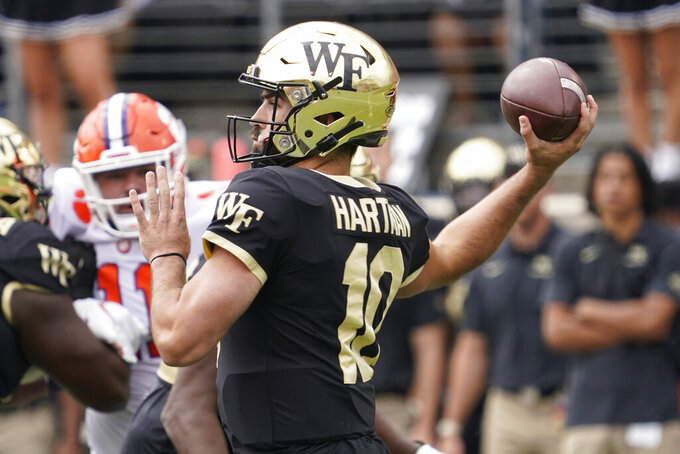 Line: Florida State by 6 1/2, according to FanDuel Sportsbook.

Florida State has opened 4-0 for the first time since 2015 and is ranked for the first time since 2018. Wake Forest is seeking to get back on track following a double-overtime loss to No. 5 Clemson. This is just the second Top 25 matchup between the teams in series history. The Seminoles are playing ranked ACC opponents in three straight weeks, with a matchup at No. 10 North Carolina State next week and a home game with Clemson on Oct. 15.

Florida State QB Jordan Travis is coming off a career-best performance, throwing for 321 yards in a 44-14 rout of Boston College. The Seminoles have their deepest receiving corps in years, with four players (Kentron Poitier, Ontaria Wilson, Johnny Wilson and Darion Williamson) leading the team in receiving yards in each win. Wake is 78th nationally in pass defense, allowing 236.8 yards per game. The Demon Deacons produced six turnovers in the 35-14 win over Florida State in 2021.

Florida State: RB Trey Benson. The Oregon transfer had two rushing touchdowns and a 93-yard kickoff return for a TD against Boston College. Benson has 37 carries for 268 yards, averaging 7.2 yards per carry.

Wake Forest: WR Jahmal Banks. A.T. Perry entered the season as the top target while Donavon Greene attracted attention for how he’d respond after missing last year with a knee injury. But Banks has blossomed, too. He has 15 catches for 238 yards and a team-high five touchdowns.

Florida State is 20-3-1 in games vs. Wake Forest in Tallahassee. But the Demon Deacons won the last two games, both of which were at Winston-Salem, N.C. (2019 and 2021). … Wake’s 171 points are the program's highest four-game total in program history. ... Deacons quarterback Sam Hartman enters the week as the FBS active leader with 85 career touchdown passes. … Florida State and Syracuse are the only two schools with three wins over Power 5 teams in 2022.