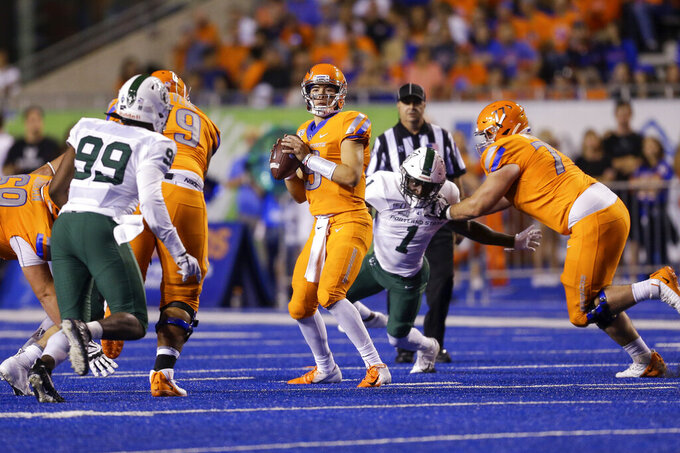 "It means something to me," Weaver said of matching the school's single-game record of four sacks. "It's always good but, at the end of the day, the whole D-line played a role in it. But we've got to keep moving forward. We've got the Mountain West conference play now and that's still our goal."

Weaver served as a perfect spokesperson for the Broncos' business-like approach to playing an FCS school for only the third time since 2010. Instead of getting caught looking past the Vikings, Boise State was laser focused.

But as focused as Boise State was, it didn't lack for flashy and explosive plays.

John Hightower returned a kickoff 98 yards for a touchdown to get Boise State's scoring started. C.T. Thomas scored the first of two touchdowns on a one-handed snag after getting tipped by his defender. And Stefan Cobbs scored on his first ever catch, racing 44 yards to the end zone and losing his helmet on a hit after he had scored.

Then there was Weaver wreaking havoc in the Vikings' backfield on just about every play in the second half.

Good things have been happening by the boatloads for the Broncos' defense in the second half.

Boise State (3-0) has yet to allow any points in the second half this season, joining Wisconsin as the only two schools to still hold that distinction.

"Protection was a problem for us all night long," Portland State coach Bruce Barnum said. "We had some things work for us early and I was pleased with the start, but we couldn't get them off the field after that first quarter."

Portland State (1-2), which played Arkansas tough in a 20-13 loss in the Vikings' season opener, racked up 159 yards in the first quarter but only 85 over the final three. Last week, Boise State allowed zero yards of total offense against Marshall.

"We haven't talked about it as a team, so it's not a thing yet," Harsin said of his team's second-half shutout streak. "For the whole team, the question has been how do we come out ready to play? The defense was ready to play tonight. We're not a total second half team yet, but we'd like to be a second half team together."

Boise State used its big-play offense early to bury an outmatched Vikings squad. The Broncos had 11 plays from scrimmage go for 20 yards or more, including three touchdowns.

Hank Bachmeier was 16-of-25 passing for 238 yards with a pair of touchdowns and one interception.

Portland State: The Vikings were picked to finish 10th in the Big Sky but three weeks into the season look as if they might be more competitive than previously believed in one of the toughest FCS conferences in the country.

Boise State: As one of the top contenders from the Group of 5 teams vying for a New Year's Six bowl game, the Broncos have little margin for error. And after cracking the rankings after an opening week upset of Florida State, Boise State appears poised to fight for that spot all the way through the end of November and has learned it has a freshman signal caller more than capable of getting the team there.

Boise State shouldn't fall any after manhandling Portland State. And with a couple of teams close to the Broncos in the polls, Michigan State and Maryland, suffering embarrassing losses, Boise State could continue to ascend in the rankings.

Portland State closes out its non-conference schedule by traveling to Eastern Oregon on Saturday.

Boise State hosts Air Force on Friday in the Mountain West conference opener for both teams.