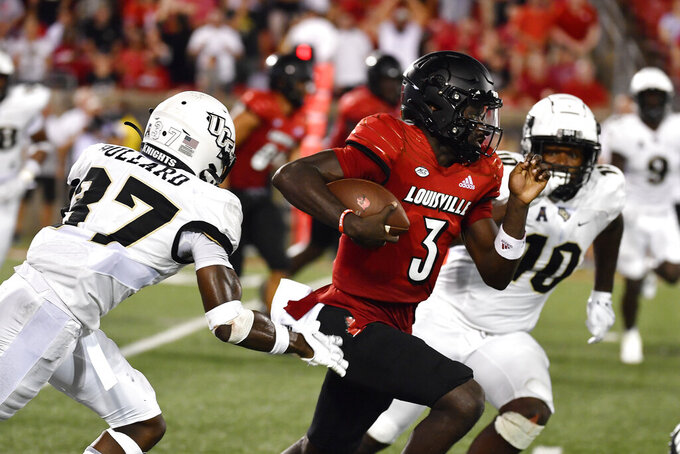 LOUISVILLE, Ky. (AP) — Jaylin Alderman returned an interception off a tipped pass for a 66-yard touchdown with 13 seconds remaining, giving Louisville a thrilling 42-35 victory over UCF on Friday night.

The Knights and their high-speed offense appeared primed to win the back-and-forth battle after intercepting Louisville’s Malik Cunningham off a deflection on the previous play for possession at the Cardinals 41 with under a minute to play. But Alderman, a freshman linebacker, was there to snatch a tip of Dillon Gabriel's pass on the next snap before finding room down the right sideline for the TD to spark a delirious celebration for Louisville.

“He's just an instinctive player,” linebacker C.J. Avery said of Alderman, who was not available for postgame interviews. “Right before that play, I knew he was going into the game and I just told him, ‘just do your job and you’ll make a play.' And he did."

UCF (2-1) attempted several laterals on the game's final play before being penalized for an illegal forward pass that closed the victory for Louisville (2-1).

Cunningham ran for two touchdowns and threw for another TD in helping Louisville. He was 23-of-38 passing 265 yards and rushed 13 times for 99 yards.

The victory was huge for a Cardinals team playing their third game in 12 days and in a second consecutive short week. They trailed twice early but rallied both times and then led twice more before getting the final word on defense.

“We wanted to have a lot of energy more than to be physical and all that," Louisville coach Scott Satterfield said. “We just wanted to be able to fly around and play hard because we knew it was going to be a hard fought game.”

UCF drove 87 yards in eight plays to tie the game at 35 as Gabriel scored on a 6-yard touchdown run with 1:21 left in the fourth quarter. Gabriel passed for three touchdowns and ran for another, completing 21 of 28 passes for 188 yards.

Louisville used trickery to lead 35-28 when receiver Braden Smith completed a 45-yard pass to a wide-open Trevion Cooley for the TD. That came after UCF tied the game at 28 early in the fourth quarter on Gabriel's 6-yard TD pass to Brandon Johnson.

“We got the big turnover down there and got a shot downfield,” UCF coach Gus Malzahn said. “We felt like we were close to winning. There were a lot of ups and downs tonight. The crowd really got into it and they had the momentum. It was a tough one.”

SEASON MAY END FOR GABRIEL WITH LAST PLAY

Dillon Gabriel exited Cardinal Stadium on Friday night with his left arm in a sling and a possible season-ending left shoulder injury. Gabriel, who led the nation in yards passing per game in 2020, was carted off the field and X-rays were taken of his shoulder after the game. He was injured on the game's final play, a multi-lateral attempt at a touchdown by the Knights.

Ford, whom Satterfield said was slowed by an illness the first couple of games, was full strength against UCF and caught eight passes for 100 yards with a 1-yard TD. Mitchell rushed 16 times for 74 yards and a 2-yard score. And a week after returning a punt 49 yards for a TD against Eastern Kentucky, Smith followed with the TD pass to Cooley for another score.

UCF: An offense averaging 622 yards per game coming in encountered more resistance from the Cardinals but succeeded when they needed to stay even. But after snatching a late interception that might have set up the Knights to win, they gave it right back off a fateful tip and couldn’t stop Jaylin Alderman’s fast return. Speed was key in this game, and their failure to slow the Cardinals in such moments proved to be the difference.

Louisville: The Cardinals did what they needed to do to stay competitive, slowing down the Knights and giving the offense opportunities to establish tempo and lead twice in a back-and-forth contest. Cunningham’s impact with his arm and feet was critical as Louisville outgained UCF 501-420, even while hobbled in the second half. Defense came up big in one of their gutsiest efforts in a while.

UCF has a bye before opening AAC play at Navy on Oct. 2.