Lawrence leads No. 1 Clemson past Syracuse 41-6 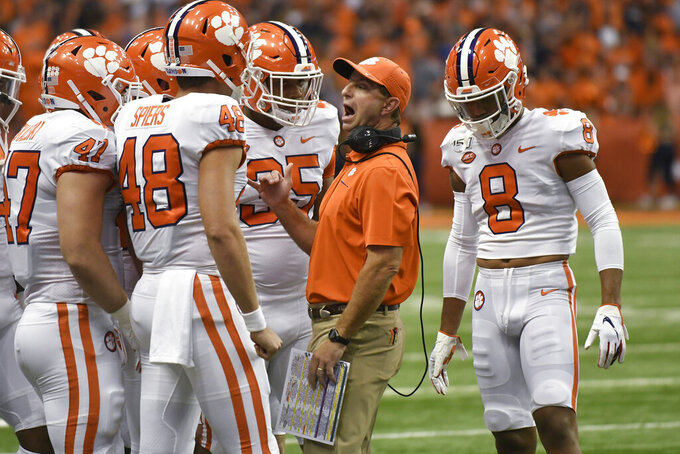 Clemson coach Dabo Swinney talks to his players against Syracuse during the first half of an NCAA college football game Saturday, Sept. 14, 2019, in Syracuse, N.Y. (AP Photo/Steve Jacobs)

SYRACUSE, N.Y. (AP) — Clemson quarterback Trevor Lawrence was forced to be a spectator a year ago when a hard hit to the helmet knocked him out in the second quarter of his first college start. This time he left in the fourth quarter with the game well in hand.

Lawrence threw for a career-high 395 yards and three touchdowns, ran for another, and top-ranked Clemson smothered nemesis Syracuse 41-6 on Saturday night.

"It felt good. It felt good to be able to finish," said Lawrence, who scored untouched from a yard out after a nifty fake to give the Tigers a 14-0 lead in the first quarter. Anytime you win a game like that, convincingly, it's just awesome."

Clemson (3-0, 2-0 Atlantic Coast Conference) has won 18 straight games, a school record and the longest streak in the nation. It's the second-longest winning streak by an ACC member in conference history, trailing a 29-game run by Florida State from 2012-14.

Syracuse (1-2, 0-1), the last team to defeat Clemson in the regular season, was unbeaten at home last fall. The Orange were coming off a 43-point loss at Maryland that dropped them out of the rankings.

"We didn't score enough points to really make it a game, and that's always something we've been able to do against them," Orange coach Dino Babers said. "When you're playing somebody that hasn't lost a bunch of games, you've got to have a clean game. I thought the defense played well enough to make it a game."

The offense didn't. Clemson limited Syracuse to 187 yards and sacked Orange quarterback Tommy DeVito eight times. Clemson finished with 15 tackles for losses of 71 yards as it won its eighth straight true road game and avenged a 27-24 loss to Syracuse two years ago.

"This is a big, big win for us," Clemson coach Dabo Swinney said. "The defense tonight I thought was amazing. It all starts up front. We lost a lot of players but we've just got some guys around here that can play."

Lawrence, who threw on the run when he had to, finished 22 of 39 with two interceptions. Clemson finished with 612 yards offensively.

"We've got a good group," Swinney said. "They're just going to get better. They've accepted the challenge. We've got three wins. That's where we wanted to be. We're a hungry team."

Clemson took a 7-0 lead on its second possession with Lawrence methodically driving the Tigers 79 yards in just seven plays. He completed four passes for 54 yards, mixing in a 9-yard gain on a keeper and finishing it with a 16-yard strike into the end zone to Amari Rodgers with standout Orange safety Andre Cisco out of position.

The Tigers boosted the lead to 14-0 on Lawrence's 1-yard keeper after a 35-yard completion on the run to Tee Higgins in double coverage and a personal foul against the Orange put the Tigers deep in Syracuse territory.

Unlike his predecessor, dual-threat Eric Dungey, Syracuse quarterback Tommy DeVito likes to set up in the pocket but didn't have time as the Clemson defense repeatedly pressured him in his third college start. The Orange were held without a first down in the opening quarter.

"We just hurt ourselves," said DeVito, who was 15 of 27 for 172 yards with one interception. "We didn't put points on the board. That's unacceptable."

DeVito was sacked six times in the first half and had to throw on the run all night. He did duck low to avoid the pass rush and hit tight end Luke Benson for 24 yards to set up Andre Szmyt's 29-yard field goal early in the second to get the Orange on the board.

The Carrier Dome was sold out for the first time in 21 years, but the homecoming crowd of 50,248, the third-largest since the building opened in 1980, wasn't much of a factor as the Orange fell behind. When DeVito hit Moe Neal out of the backfield for a 50-yard catch-and-run down the right side and connected with Neal again on the next play for 17 more to move the ball inside the Clemson 10-yard line, the Dome came alive. But the Orange couldn't solve that defense, had to settle for Szmyt's 23-yard field goal, and trailed 17-6 at the half.

Syracuse had two terrific chances to get back in the game in the third and failed both times, prompting many fans to head for the exits.

Chris Fredrick intercepted Lawrence and returned the ball 20 yards to the Clemson 9, but DeVito was forced out of the pocket on the next play and his pass on the run was intercepted by Mario Goodrich at the 4. Three plays later, Rodgers caught a swing pass out to the right, averted two tackles, and went 87 yards for a score. The play was reviewed as Rodgers appeared to be barely out of bounds on the replay but it was allowed to stand.

Trill Williams intercepted Lawrence late in the period and returned it 53 yards to the Clemson 3, but the Orange were unable to punch it in and turned the ball over on downs when DeVito was stopped on fourth down.

Clemson linebacker Isaiah Simmons had a game-high 11 tackles, including two sacks among his 3.5 tackles for a loss, and the outcome was exactly what he was looking for.

"Of course we want to dominate the ACC," Simmons said. "I felt there was a lack of respect coming from them. It seems like they put everything they had into beating us with all their hype videos and making our game homecoming and they sell out the stadium. You can't have a good program and do that. You've just got to treat every opponent the same way, like it's a nameless opponent, and prepare like everyone. We play every week like it's for a national championship. That's the way it has to be. You can't dwell on the past. You can't look forward to next week. You just have to go week by week."

Higgins had seven catches for 150 yards, all in the first half, outgaining the Syracuse offense by 16 yards in the first two quarters.

DeVito lost 42 yards rushing, mostly on the sacks, and four other runners for the Orange managed just 69 yards on 27 carries.

Syracuse has a streak of 17 consecutive games with a takeaway, the third-longest streak in the country.

Clemson is seeking its third national championship in four years and the top-ranked Tigers easily avoided a pitfall to stay on track in a conference that appears to be down this year.

Clemson: The Tigers remain the class of the ACC and the win over Syracuse, the team picked to finish behind them in the Atlantic Division, removes an obstacle going forward.

Syracuse: Despite a 43-point loss at week ago at Maryland, the Orange, who were ranked No. 22 in preseason, still received votes in this week's poll. That's a sign of the respect the team has earned under coach Dino Babers, who guided them to 10 wins last season. Expect the Orange to regroup after squandering chances in a big game.